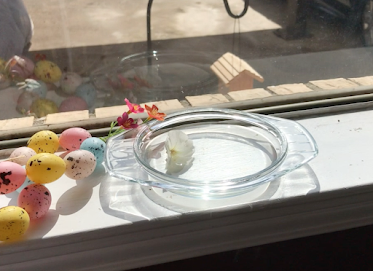 It is a beautiful April 10th Day here in Dallas, Texas, and as I do every April 10th, I got up to watch the sun dance in a bowl of water, for on this day each year in ancient Celtic times, it is what the Celts did.  I am not sure why they did this, but I assume it had something to do with the Goddess of Healing, Bau, the mother of Ea, who was honored each year on this day in ancient Babylonia with a sacred religious festival called The Day of Bau.  Oh, yeah, and Bau was originally the Goddess of the Dog and so a dog would be sacrificed in honor of the Bau, but after the dogs became part of the family, the celebration changed to the a festival of healing because of the healing qualities of a dog lick.

On this day in ancient Rome, the final day of Megalesia was celebrated with a sacred horse race.  The Megalesia Festival went from April 4th to April 10th, and was a celebration for the Great Mother of the Gods, Cybele -- ouch, yes, the goddess that was honored on The Day of Blood by priest cutting off their testicles in honor of her love for Testis, as I told you in a previous post.  Of course, as with most of the other pagan celebrations this one too was secularized into a sport for the very wealthy, but it still carries the sacred overtones of Megalesia in its title "the sport of kings."

There's where I'll leave you today boys and girls.  I'll make notes of the day and tell you what the effects of watching dancing sun light in a bowl of water has on me.