Attis and His Testis: The Original Spring Resurrection Story. 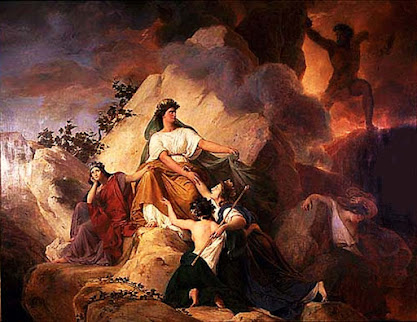 In Ancient Rome, March 24th was a very painful day.  Yes, a painful day indeed.  You see, it was considered the Day of Blood (dies sanguines).  Ouch.  In honor of the Mother-Goddess Cybele, people would lacerate themselves with knives to offer her blood.  New priest would castrate themselves and spill their blood on the altar, and the old priest would think “Thank god that's not me.”   This was done in a real-life imitation of what had happened to the goddess’ consort Attis, who in case you didn’t know, was the beau of the goddess Cybele and to show his love he castrated himself to avoid marrying another, that’s one story, there are many, but they all end with him loosing his jewels. Ouch again.  But don’t feel sorry for Cybele and Attis’ love life, for you see, Attis was a vegetation deity who could regenerate himself each year.  That’s right, each spring he would grow new testicles in case Cybele was in the mood for some, oh la la.

One story goes that Attis grew up like a flower, and when he had grown to be fair and tall, he was beloved by the Mother of the Gods (Cybele).  And she entrusted all things to him, and so set on his head the starry cap of youth.  Yes, he was a nature boy, and real tree huger, and man who understood the strength of a powerful woman.
In all of the stories, Attis is a vegetation god, and in his self-mutilation, death, and resurrection, he represents the fruits of the earth, which die in winter only to rise again in the spring.  Hmmm, sounds like another resurrection story some believe today, the name of which escapes me right now, but you know the one, the Jewish carpenter who… or is it Krishna on a cloud?… wait, no, it’s that macho-man god on a carpet?  shit, it’s all of them.
Moving on: as I said earlier, Cybele was the Mother of the Gods, that much is very clear, what I failed to mention is that she/he was born a hermaphrodite, which scared the shit out of the other gods so much, they castrated her and tossed the male organ to the ground — that’s right boys and girls, they had closed minded homophobics back then too, just as we do today.  Anyway, the male organ grew into an almond tree and one woman came upon the tree and plucked its fruit.  Holding it to her chest, it disappeared, and suddenly she was pregnant.  The child she bore was… Attis... oh yes, Jesus, that's the name I forgot earler. The other virgin birth story that would come a thousand years later, but who's counting?
Yes, Cybele fell in love with Attis and the boy promised to always belong to her.  But, he was of Greek ancestery and so that was hard, and well, he cheated on her by asking another to marry him.
Enraged and in a jealous frenzy, Cybele appeared at the wedding with her lions (the symbol of her dominance over the wild) and drove everyone mad, including Attis who ran off into the hills.  Screaming and thrashing about, he cursed himself for forsaking the goddess.
Then, he castrated himself.  Cybele came upon his bloodied body at the foot of a pine tree.  Feeling guilty for what she had done, she repented her actions to Zeus.  Empathetic to the goddess, Zeus decreed that Attis’ body would never decay and that the pine tree would forever be considered a sacred tree.
There you have it boys and girls, the story of Attis and His Testis: the original Spring resurrection story.