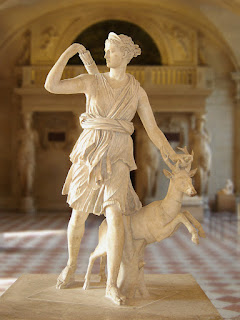 Today, Initiates, let's look at one of my favorite heavenly deities, the goddess Diana, for in Roman times on this day (April 11th), it was customary to bake bread in her honor.   Yes, like the bread used in today's popular churches, worshipers of Diana broke bread in her honor,  and it sometimes had a cross on it too, hmmmm, which is no biggie because throughout history, gods, goddesses, and their ways have been shared.  For example, Diana was actually Artemis to the Greeks before she was Diana to that Romans, that's just how the gods and goddesses swing.

Like the Greek goddess of hunting, Artemis, Diana was also the goddess of hunting, and so for luck before the hunt, families of the hunters would bake bread in her honor; if the hunt was successful, the families would sing praises to Diana as they dressed their kill, and that evening, they would party like it was 1999 -- BC of course.   Wine, costumes, and if the guards weren't looking, a little toot.  Of course, like today there were those more intellectual types who would take mushrooms and veg' out in the bathhouses, but that's a story for another time.

As with all religions, worship of Diana changed over time and so she went from the goddess of the hunt, to the goddess of chastity, fertility, and the moon.  Her services were usually held in open-air temples, or altars in the forest.  Her followers became so popular in size that she even has an honorable mention in Acts 19 of today's Christian bible, where it is stated that people "...rioted in Diana's defense, shouting 'Great is Diana of the Ephesians!'."  Brings tears to my eyes.

The thing that led to the destruction of Diana's church, however, wasn't that she was so popular with the people, but that she was popular with the slaves who could find sanctuary in her temples, and so would not be returned to their owners like the other faiths would do; which, the powers that be, both secular and religious, could not have for one second; this, I believe in my humble opinion, is the reason Diana was never recognized as a Roman deity like Jupiter, Apollo, or Juno -- to name a few.

Yes, Diana was originally the hunting goddess associated with wild animals and woodlands, who later became a moon goddess of the people which made her the emblem of chastity.  Oak groves were especially sacred to her, and she was praised in poetry for her strength, athletic grace, purity, distinct beauty, and hunting skill.

Finally, as with all of our heavenly deities of our past, the free and open worship of Diana ended by the hands of the Demiurge followers who raided and destroyed her temples led by Saints such as John Chrysostom in the early fifth century, which was recorded in history as a "peaceful" conversion.  It wasn't, it was a violent sadistic act in the name of their god which sent us running to the woods for safety.  The place we remain today.