Drink Clean Water in Honor of the Vestal Virgins on This Day for Good Luck. It works! 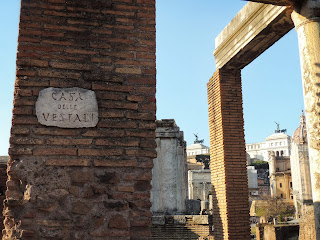 On this day in ancient Rome, the Vestal Virgins performed an annual purification rite to ensure the water supply for the coming year.  It consisted of the "sacrifice" of twenty-seven straw puppets to the river god of the Tiber.

The Vestal Virgins were the priestesses of the Roman goddess of the hearth (home).  They tended the sacred fire in the shrine of Vesta, performed rites, and kept the place tidy and clean.  The roman writer Plutarch (45-120 CE) said they were the "keepers of divine secrets, concealed from all but themselves."

Vestal virgins were chosen from highborn families and were granted privileges that would have been unimaginable for other women in Ancient Rome.  They could own property, vote, and write a will.  They had the best seats at public games, and they even had the power to free condemned prisoners and slaves.

The virgins were chosen between the ages of six and ten years old by the chief priest and had to serve for 30 years (during which time they, of course, had to remain chaste). Once their 30 years of service was completed, they were free to marry, but very few did as it was considered unlucky since they had, essentially, been the brides of Vesta for most of their lives and were consecrated to the goddess.strict observance of a single life.

If a Vestal Virgin failed in her duties, she was severely beaten and the punishment for loss of virginity was being buried alive, though other, worse, punishments were sometimes given such as having molten lead poured down one's throat.  Even so, the Vestal Virgins were honored by the community, had most of their needs provided for by temple tithes, and were free of many of the restrictions Roman women had to endure.  It was, in fact, because they were so highly regarded that the punishment of breaking their vows was so severe.  Plutarch writes, "If these vestals commit any minor fault, they are punishable by the high-priest only, who scourges the offender, sometimes with her clothes off, in a dark place, with a curtain drawn between; but she that has broken her vow is buried alive near the gate called Collina, where a little mound of earth stands."  Most of the virgins on record kept their vows, however, and continued through time to honor their goddess Vesta, and the city and people of Rome, until the coming of Christianity.

The fall of the Roman Empire, it was argued, was caused by the acceptance of Christianity and the neglect of the old gods who had kept the city safe and prosperous for so long.  Both St. Augustine and Orosius wrote in defense of this very accusation.  The desecration of the temple of Vesta, and the disbanding of the Vestal Virgins, was seen by pagans as the height of ingratitude for the service the goddess had given the city over the centuries.  A woman named Serena, the Christian niece of Theodosius I, is said to have desecrated Vesta's temple by taking the necklace from her statue and claiming it for her own -- those silly Christians.  For this act she was cursed by one of the last remaining Vestal Virgins and was tormented by nightmares about her impending death.  Whether she died young is not known, nor is the truth of the account verified, but the fact that it survives attests to the importance the Vestales played in the life of ancient Rome and what their loss meant to those of the city who did not place their faith in the new god of the Christians.

So dear readers, enjoy a glass of clean water in honor of the Vestal Virgins today.  It can do you no harm.