John Lennon and Emily Dickenson: thoughts of this dying man.

A vision came to me this morning while chanting: I saw John Lennon's 'Imagine' album cover and saw he had his head in the clouds on the album cover.  I never put it together back then, but now I do. 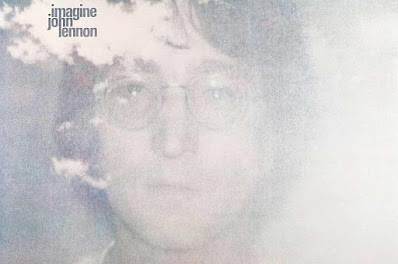 I had stared at that album cover for hours as I listened to the songs on the album.  I never thought about how John had his head in the clouds.  I saw it as two separate things: the clouds, and then John.   I never put the message together for I never have been good at seeing the obvious.  The obvious message of how he was telling the world he was okay with his head in the clouds.  Something I heard a lot as a kid and it was never good: "Get your head out of the clouds or you'll end up dead."

It is funny that I see now how John was telling me it was okay to have my head in the clouds while the world around me was telling me different.  And I tried to get my head out of the clouds, I really did, but I never could.   As a kid they told me to "apply myself," "focus,", "Wake up!"  But I couldn't.  And when I became a grown man with a wife, kid, and house in the suburbs, my head was still in the clouds.  Which led to a divorce where I could be alone.  You see, being alone with my head in the clouds works for me.

In the 90's they told me I wasn't "grounded enough."  I did the New Age workshops and tried to find my place on the earth.  Those were wasted years: a person with his/her head in the clouds can not be grounded, and so, must remain alone.

Which brings me to Emily Dickenson.  I digitized a documentary of her life yesterday, and just as I had never conceptualized the meaning of Lennon with his head in the clouds, I had never conceptualized the life of Emily Dickenson and how she remained alone.  Obviously, she too had her head in the clouds and so had to be alone, for being alone no one can tell you to get your head out of the clouds, now can they?

I told my oldest friend about my cancer today.  He lives in China.  So now two people know about my death sentence, and both are on a continent I'll never see in this lifetime: China.  It is funny that I've been most places on earth but never to China, in this lifetime.  I know I have been there in a past life.  With a third of the people who have ever lived having been Chinese, I think it is safe to say we have all been Chinese in a previous life.

Not sure where I am going with today's words, and I am sorry that they are so cloudy, but well, you see, because I could not stop for death, death has stopped for me, and I have never been closer to John or Emily.

Because I could not stop for Death

Because I could not stop for Death—
He kindly stopped for me—
The Carriage held but just Ourselves—
And Immortality.

We slowly drove—He knew no haste
And I had put away
My labor and my leisure too,
For His Civility—

Or rather—He passed us—
The Dews drew quivering and chill—
For only Gossamer, my Gown—
My Tippet—only Tulle—