Feb. 26th, A Good Day For A Bloody War as I Chant for Peace. 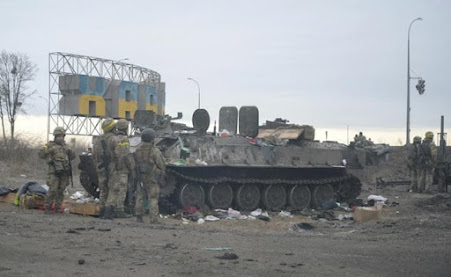 This morning I chanted that Putin find his Buddha nature and stop the killing in Ukraine.  He hasn't yet.  It is now the 3rd day of the Russian Invasion of Ukraine.

Per USA Today about half of the Russian forces are in Kyiv now and still finding resistance.  "Resistance" means death, blood, human sacrifice.

What kind of person can voluntarily send people to die for his/her questionable actions?

Where is the humanity?

I will tell you: humanity died with truth.  And that's the way the conservative oligarchs running the world want it.  That's why 25 % of Republicans (Trumpians) are supporting the Russian despot leader who hates America.

Ukraine is now fighting for its Independence against Russia just as the USA did against England.  And those Americans supporting Russia are enemies of the state: enemies of truth, freedom, and justice.

I chant for you.  I chant you wake up and join the human race before it is too late.

Please, stop letting bad history repeat itself on this day.

On this day in:

1577 -- Eric XIV, the insane and deposed king of Sweden, ate his last meal in prison -- a bowl of poisoned pea soup.

1616 -- Galileo is told to stop teaching "truth" by the Roman Christian Church.

1815 -- Napoleon Bonaparte escaped from exile to wreak 100 more days of havoc -- until his final defeat at Waterloo.

1860 -- 100 members of the peaceful Native American tribe of Wiyot are slaughtered as they slept by white settlers.

1918 -- 600 people are killed when stands collapse and catch fire at a Hong Kong horse track.

1936 -- a Japanese revolt led by 1,400 army persons attacks the prime minister's residence and other government and military buildings killing many of their leaders.

1987 — The Iran-Contra Tower Commission report proves President Ronald Reagan was involved in the scandal to sell arms to Iran for the release of American hostages “after his election.”  Yes, Reagan worked with Iran to help him get elected — now you know where Donald Trump got the idea.

1993 — An al Qaeda-planted truck bomb was detonated in the parking garage of the North Tower of the World Trade Center.  Six people were killed.


2022  — Health Minister Viktor Liashko said on Saturday that 198 Ukrainians, including three children, have been killed during the Russian invasion.

A further 1,115 people have been wounded, including 33 children, he wrote on his Facebook page (as reported in several news reports including Barron's).