So begins the Scorpions 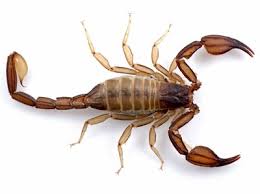 Today (echo, echo, echo...)  is the 23rd of October which means it is Scorpio time of year.  Why did the ancients name this time of the year after the Scorpio?  Well, season of the witch was already taken.  No, seriously, the scorpion is regarded as "a creature, which has a very tender face to be compared with the countenance of a chaste virgin."  Like women, therefore, it has its beauty and innocent charm.  At the same time, however, its opposite end is capable of delivering a painful, possibly fatal sting, and the creature is, therefore, to be feared and avoided.  Thus the scorpion evokes the same ambivalence and the same quivering conflict of desire and fear.

Folklore also holds that the oil of the scorpion is a cure for the pain of its sting, and the scorpion is, therefore, all the more appropriate as a symbol of the fair sex, for as Hermann Hesse notes in his book Steppenwolf, "Women...relish much of scorpions, for both have stings, and both can hurt too."

And so it is with this time of year when the veil between heaven and earth is so thin.