RFK Killed on this Day. 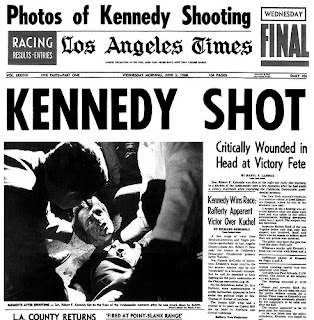 It was fifty-years ago today, that Bobby Kennedy was murdered in L.A.   He had just won the California primary and was, as his final words said,  on his to to Chicago "to win...."

Kennedy had entered the race mid-summer, after president Lydon Johnson said he would not seek a second term in office.   A lot of speculation as to why Johnson didn't run a second term, seems to me he was told not to by the puppets-masters he worked for.  Most notably, the same group he met with on the eve of President Kennedy’s assassination at the Dallas home of Clint Murchison (with Murchison was Harold Hunt, Edgar Hoover, Clyde Tolson, JOhn McCloy, Richard Nixon, and Lyndon Johnson).   This was the meeting where Johnson had said: “After tomorrow, those Goddamn Kennedys will never embarrass me again.”  I see no other reason, unless "guilt" for his involvement in the assassination of John F Kennedy got the best of him.

I'll stop there on the order brothers assassination that happened on November 22, 1963 in Dallas Texas, today we are talking about the June 6th, 1968 assassination of Bobby Kennedy.

As I have said, Bobby Kennedy had just won the California primary and was on his way to win the Democratic Presidential Nomination when he was murdered.  Bobby had left the acceptance speech through the hotel kitchen when a man named Sirhan, came up to him and yelled "Kennedy, you son of a bitch," as he unloaded his .22 caliber pistol into Kennedy.

Yes, another Kennedy in the span of five years was murdered in public under strange circumstances.

Before I list the conspiracy facts, let me tell you that Bobby Kennedy was quoted in privacy that he felt the C.I.A had something to do with his brothers assassination.   And, well, although Bobby seemed to running for president to help the poor and give a voice to the civil-rights movement, revenge for his brother's death was definitely a problem for whoever was behind the JFK killing in Dallas.  And so, Robert Kennedy had to die too. 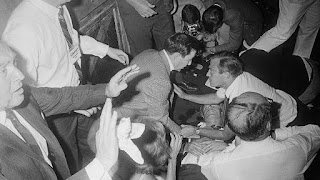 The blood seeping from Kennedy’s head came from the would behind his right ear.  Powder burns indicated that the shot came from no father than two or three inches away.   Sirhan was at all times in front of Kennedy. 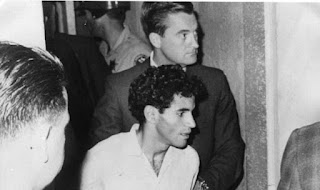 Based on evidence of bullet holes and bullets found in the pantry, at least thirteen shots were fired.  Sirhan’s pistol held just eight shots and they were accounted for, having been recovered from Kennedy’s body and the bodies of other wounded victims. 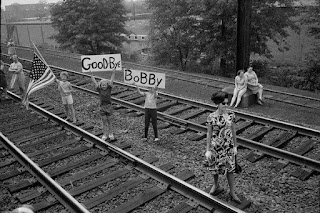 At least five witnesses—acording to police reports—saw a woman in a polka-dot dress fleeing the scene yelling, “We killed Kennedy.”