I dreamed of George W Bush last night.  He had invited me to his house.  I think it might have been a suggestion from the Harold and Kumar movie Escape From Guantanamo where George Bush smokes a bong with them and when Kumar ask, "Isn't that hypocritical of you to smoke pot when you don't support any of the anti-drug laws?"  To which Bush replies: "Do you like to give a hand job?...Do you like to get one?...That makes you a hypocrite too."


In my dream Bush was similar: really nice, he showed me his house and introduced me to the family.   I was careful not to bring up politics because I knew he had only invited me over to see who this liberal-blogger in Dallas Texas was.   I mean, I am certainly on some list from that time I sent him back the medal I earned in the Navy after he and Dick Chaney did away with the Geneva Convention laws and in my book, made the USA the bad guys.

Yes, true to nature, I was the perfect logger, perfect guest and only complimented him on everything he did and said.   At one point I was outside the house on the patio and could see a black guy at his car screaming: "No, no, NO!   I'm not buying this, you still have blood on your hands for your profit war and bad policies...."  Bush stepped in front of me so I wouldn't see the guy.   I pretended not to notice.   Next thing I knew, we were at the dinner table, and I was standing and talking when I noticed Barbara Bush had had enough of me.  She punched the table and told me to shut the f8(K up.

I was rushed out the house then.  That's when I woke up screaming.

I guess the guilt of letting Bush off the hook for all his dirty deeds upset me.   Unfortunately, it's what we liberals do.   We bleeding heart softies.   We are so easy to win over and not at all like the nuts on the other side who still to this day hate Jimmy Carter and still deny that our first black president did a pretty good job after inheriting the government meltdown George Bush left us.

Ha, I said "Left" in that last sentence.  Am I still dreaming?

Oh, and yes, I did take an Ambien, maybe that had something to do with it.   Let me look and see what the side-effects are?

"Racist Tweets!" Holyshit, Roseanne Barr was correct!   She's not a racist.   Her racist tweets comparing a black woman to an animal was not her fault at all.  Give her her show back ABC. 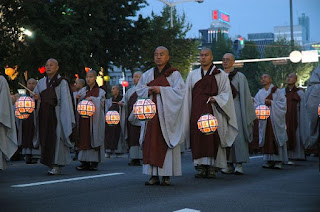 Theravada Buddhist observe the annual Triple Blessing of the God Buddha on this day.  Shrines and houses are decorated with flowers and special prayer flags in celebration of the Buddha's birthday, enlightenment, and passage into nirvana.  Offerings of flowers, incense, and rice are made during the festival's three days.