I want to talk with you about sports today boys and girls.  Mainly, hockey, but indirectly its mirroring of the current state of the USA.   To begin with, the city of Las Vegas got a hockey team this year called The Golden Knights.  There pregame shows are great, a page right out of your local Renaissance Fair. They have a lost knight holding a lantern with a glaze over his face as if he knows something about the future we don't.  Maybe he does.  More precisely, The coming Impeachment of Trader Trump.  Wooh, how did I get there?   Here's how. 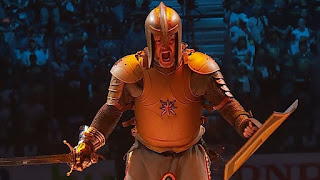 First of all, the Golden Knights are an expansion team.  This is their first year in existence and they shouldn't be this great.   Now, juxtapose this with Donald Trump, our first expansion president ever, and he shouldn't be there either.  Also, just like Trump, the Golden Knights just won't go away.  Every now and then they show signs of weakness, but then come back with the vengeance of Gordie Howe, just as Donald Trump says something stupid about a great War Hero like John McCain, but then is on Fox News the next day without the slight hint of an apology.

Now, I've often told you how "signs" are an important part of the Esoteric Life, and I truly believe this.   I mean, if a nightingale lands on the hood of your car, pull over, park it, and call Lyft.  Trust me on this one: something bad is going to happen.  If a Dove lands on the hood of your car, continue on with joy and amazement, it might be your reincarnated grandmother, and, something wonderful around "love" will soon happen.  And, when a new hockey team out of nowhere is in the final series to win the Stanley Cup, take not.   Especially, considering that they will be playing the Washington Capitals.   Yes, the city where the USA government once stood before Donald Trump sold his soul to the Russians to get elected.

So now you should see the importance of this year's Stanly Cup playoffs and how it mirrors today's madness in DC.   And if the Golden Knights win, then, Donald Trump will not be impeached; however, if the Washing Capitals win, good bye Trump! 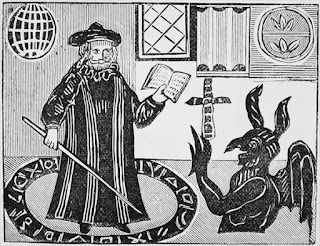 Finally, speaking of symbols, did you hear that there is a sinkhole opening up on the lawn of the White House?    No shit.  Could it be that the Devil is coming for his favorite convert, Donald Trump?   Yes, indeed, a page right out of Goeth's Faust if there ever was one.

On this day in 1431, our dear Joan of Arc is publicly asked to recant.

Joan: You take great pains to seduce me.  I leave it to your consciences whether I should recant or not.

The Bishop reads her sentence.

Joan: I am content to do what you will have me.  I would rather sign it than burn.  Now, you churchmen, take me to your prison, and let me be no longer in the hands of the English.