Joan of Arc's Last Words with a rose

On this day in 1431, Joan is still alive, but it won't be long (sad face) before the Church murders her!

Again on this day they say the usual stuff:  (paraphrased) "You are woman, you can not have had a religious experience, just admit this and everything will be fine, shit, you can even continue to wear men's clothing: just admit you didn't talk to God, bitch!"

To which, Joan replies:

If I were at the place of execution, and I saw the fire lighted, and the faggots (pile of burning wood, Joan wasn't a homophobic) catching and the executioner ready to build up the fire, and if I were in the fire, even so I would say nothing else, and I would maintain what I have said at this trial until death.

I have nothing more to say.

Truth is, today is not a good day for criminals:


In 1701, the notorious English privateer (successful businessman by today's standards) William Kidd, popularly known as Captain Kidd, is hanged for piracy and murder in London.  For years, stories of buried treasures involving Kidd attracted treasure seekers from around the world -- mostly America.

In 1712, con man (successful businessman by today's standards) Richard Town is hanged in London on his birthday for secreting 15 tons of tallow on a ship and attempting to flee with money form defrauded creditors (hedge fund by today's standards).  On the scaffold, displaying the same calm and moxie that had got him there, Town belted out to the open-air crowd, "My friends, this is my birthday.  I see you have come to help me honor it." Turing to an attractive lady in the crowd, he continued, "madame, my compliments, and thank you for coming to my adventure."  He then adjusted his cap and signaled for the drop.

In 1934, band robbers and bad poet Bonnie and Clyde are shot to death by Texas and Louisiana state police as they drive a stolen car near Bienville Parish, Louisian.  Police said that the pair had attempted to flee, but from their bodies still shoved in their car seats, it's obvious they were ambushed. 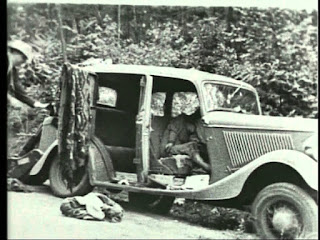 In 1945, chicken shit Nazi Heinrich Himmler, who tortured Jews for years under the Nazi flag,  takes a cyanide pill to kill himself one-day after having been captured, stripped naked, and imprisoned.   Who the f*&k gave him the pill?   Hmmmm.  Seems his American guards felt sorry for him.   Bastards!

In 1960, on this day, the Israeli prime minister David Ben-Gurion announces that Nazi war criminal Adolf Eichmann had been captured in Argentina by Israel agents --- after having lived twenty-years on a beach drinking margaritas with the other Nazis everyone knew about but felt sorry for.  I mean, they only exterminated three or four million people -- none of which were Christians.

On this day in ancient Rome, the Rosalia, a sacred rose festival, was celebrated each year.  The festival was dedicated to springtime and to the flower goddess Flora and the love goddess Venus.  Since flowers, especially roses, were plentiful at the time of the year, they were used in many different kinds of perfumes, cosmetics, and teas.

So pick a rose today?