OK, truth seekers, you are really going to like what I have to say today.   One word:  Crazy. 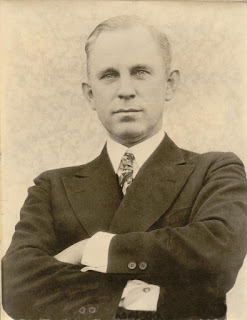 J. Frank Norris grew up in a dilapidated shack in Texas and ended up being a great Man-of-God.  In his prime he worked two church's, one in Fort Worth Texas and the other, in Detroit Michigan.  Besides spiting hateful words against liberals, Catholics, and woman, he actually shot a Catholic man who had come to him to complain about some hateful things the good reverend had said about the Catholic mayor of Fort Worth.  As justice would have it, Norris claimed self-defense and was acquitted by an all Baptist jury. 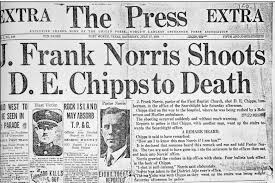 The Financial District’s “hard-hat” riot of 1970


On this day in 1970, construction workers who had nothing better to do went down to the local antiwar demonstration in New York city and kicked-the-shit out of a group of peace-nix bastards.  Never mind the fact that everyone in the world knew at the time that the war was a lost cause and the war protesters weren't fighting against America, but for it, the construction workers took a few more years before they too joined in the protest. 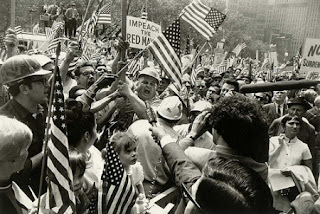 Another example of how we attract trouble into our lives, can be read from the journal of Elizabeth Pringle, May 8th, 1905.
Mrs. R., one of the loveliest women in our community, was struck by lightning during the storm last evening.  She had always had a great terror of lightning, though in every other respect she was a fearless woman, so that her family always gathered round her during a storm and tried as much as possible to shut out the sight and sound.  On this occasion her husband and daughter were sitting one on each side of her on an old-fashioned mahogany sofa, she with her handkerchief thrown over her face.  When the fatal flash came the husband and daughter were thrown forward to the floor and turned to reassure the mother as to their not being seriously hurt.  She was still sitting straight up on the sofa with the handkerchief over her face; they lifted the handkerchief  as they received no answer and found life extinct...There was only one small spot at the back of the neck. 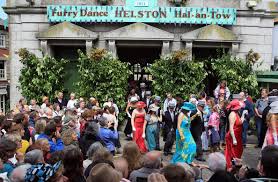 In Cornwall, England, on this day, the annual Furry Dance is performed in the streets of Helston.  One of the oldest surviving springtime festivals in the world, the Furry honors the Celtic horned god in the guise of Robin Hood.  Stolen by the church, it became known as Flora Day, and now coincides with the feast of the Apparition of Saint Michael the Archangel, Helston's patron saint.  Bastards!