Wow, on this, the anniversary of the day that their Lord and Savior parted the Red Sea to let the Israelite's flee Egypt, I get to tell you about another great religious experience happening today brought to us by the soon to be assassinated, Pope Frances.

I'm so sorry I used the word "assassinated" and "Pope" in the same post, but as I told you a few weeks ago, Pope Francis has pissed off a lot of radical Christians around the world by asking Christians and Muslim's to build "A New Civilization of Peace."  What!  Yes, he's telling the extremist on both sides to cool their jets.  Duck for your life! 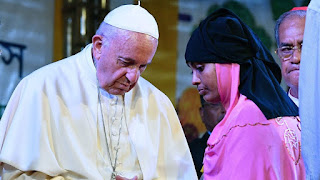 I wasn't there, but I imagine everyone on the podium with Pope Francis ducked for cover when he said that for fear of another church shooting.   I mean, nothing scares me more than radical Christians and I'm not even black!  Take for instance the Polish church leader who actually threatened the Pope's life over the "Christian and Muslim" statement.  Ouch!  Compare this with the Dalai Lama coming out a few years ago and saying he was the end of the line for Dalai Lama's and wouldn't be reincarnated into the next Dalai Lama: sure seems like times are a-changing.

And so just today, Pope Francis has come out and denied the existence of hell.  What!  He is really sounding like one of us now:  A Spiritual Enlightened/Truth Seeker opposed to religious idiots! (Say that with a cracker in your mouth).  Still, I wouldn't get close to him in a Dallas motorcade.

Yes, just like Pope Francis I'm looking forward to the future when we are all enlightened, living in peace without our divisive gods.   And why is this?  Well, if we don't go forward, we will go backwards.  Need I remind you that on this day in 1692,  in Salem, Christians accused Sarah Cloyce of witchcraft.  I checked in all the registers, and will tell you: she was no witch.   But now, in the Salem Town journals, it's a different story: apparently, while Benjamin Gould was sleeping, the form of Sarah Cloyce visited him.  This encounter left Gould with such a pain in his foot he could not force a shoe on it for two or three days thereafter... all because of the witch!
The Salem Witch Trials, Roach, Marilynne