April 5, what a day indeed.   As coincidence would have it, on this day in 1614, in colonial Virginia, Pocahontas marries Jamestown tobacco planter John Rolfe, and by doing so, ensured peace with the Native Americans because Pocahontas' dad was the leader of most of the tribes in the area.  I guess you could say Rolfe married up.   Fast forward to the year 1758, on this same day! What? Really, on this same day in Pennsylvania teenager Mary Jemison is kidnapped by Native Americans from her family's farm and spends the rest of her life with the Senecas nation.   She eventually wrote a best selling biography about her captive history and it became a huge hit and was sold at all the feed stores.

On this day in 1794, French revolutionary leader Georges Jacques Danton is executed by guillotine for standing up to the wealthy 1% bastards running the show back then (The Monarchy).  Renowned for his satire, he said things like "The kings of Europe would dare challenge us? We throw them the head of a king!" at the execution of Louis XVI.

Before his own execution, Danton said: "Be sure you show the mob my head.  It will be a long time ere they see its likes again."

Danton was a man, yes, a big man.  Just look at his mugshot: 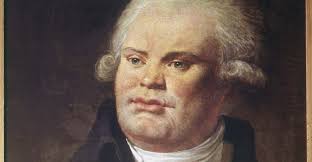 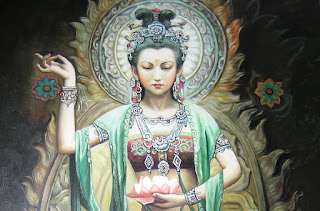 On this day in China and Japan, people celebrate the festival of Kwan Yin, goddess of compassion, healing, mercy, and forgiveness. Offerings of incense and violet-colored candles are places on Kwan Yin's altar, along with rolled-up petitions for healing and protection that have been written by her supplicants on pieces of rice paper.