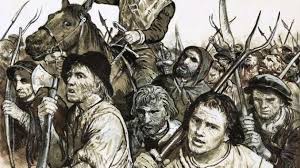 On this day in 1834, England figured out how to handle its workers requesting fair treatment from the 1%: they shipped them to the penal colony in Australia.  That's right,  six agricultural laborers from the English town of Tolpubble in Dorset were sentenced to seven years of imprisonment.  Their leader, George Loveless, wanted to create a union to give them greater bargaining strength with landowners.  The laborers lived in desperate poverty on wages of nine shillings a week.   Yes, they were working in poverty.   Not too different from most people today.  It might not be you, but it is someone you see everyday: maybe that hairdresser, they fast-food counter person, or that security guard given a gun to protect your apartment complex.  It's bad today, only there are no more islands to send us to for punishment, now, we stand on street corners begging for quarters.   Yes, this is your conscious speaking ass-whole:  do something, get off your doughnut.   Pay attention, soon it will be you... unless, that is, you are one of them.  But then, why would you be reading this.

Ironically enough, on this day in 1948, The Taft-Hartley Law was invoked for the first time.  Workers in the Atomic Trades and Labor Council could not walk off their jobs at the Oak Ridge National Laboratory until a "cooling off" period of 80 days had passed (allowing their 1% leaders to find their replacements while pretending to negotiate terms).

Fast forward to today where the Supreme Court is hearing the "Fair Share" practices where workers are forced to pay union fees.   Now, this may sound un-Amercian to force workers to pay for union fees, but the fact is if you don't the unions won't exist.   Why?   The companies will hire people on the bases they agree not to pay the union fees.    Now, my mother worked under a union in Detroit and every week complained about the $30 dollars they took out, especially since the unions weren't doing anything for woman at the time, and so she worked beside men making a third of their pay.   So, I grew up not appreciating the unions; however, without them we would never have gotten an 8 hour work day -- which more and more people are losing today.   Conversely, we wouldn't have paid-holidays, healthcare benefits, and be working beside children.    That is what the unions gave us:  a middle class.   And once the Supreme Court votes away the "fair share" provision, the remaining unions, mostly city workers at this time, will go the route of the auto unions and pilot unions:  gone.   Or worse, as reported in HuffPost, Pilots on Food Stamps to make ends meets.   What?   In America!  Yeah, no shit, Sherlock, sit back, have another donut, don't concern yourself with it, your flight to Cancun is probably safe. 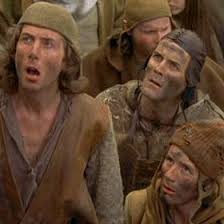 So, I end this post by saying I'm glad the unions will be gone soon: then we can get on with our revolution against the 1% by blocking their tollways and jamming their gated locks on their private neighborhoods so they have to deal with us, because, soon the imbalance will be so noticeable they will be effected too.
For those of you who don't believe workers rights are being destroyed so the 1% can add a few more cars to their collections and coins in a Swiss bank, are fooling yourself.   When the bottom falls out it falls out for all of us.  When the rich don't pay their share, we all suffer.   I have a friend now who works for a major department store, I won't mention their name because it might affect my trips to the mall because I park by the Dillard entrance to my mall and have to enter through that door.   Anyways, she sells cosmetics, she has too, she left an abusive relationship and so has to pay her rent, food, etc, and that jobs does get her closer to making ends meet than the fast-food options.   The problem is, she works slave hour, slave rules, and has no say.  For instance, they don't allow them to bring coffee to their counters, nor do they give them a break on Sundays.   They also don't five them chairs to sit in, and here is the kicker, they really don't give them days off.  The few days she gets off she has some-kind of training to go too.   Then, her job is threatened daily for not making enough sells, when, the mall is so empty you could fire an AK14 through it and not hit anyone -- fortunate for her,  that is probably why no one has. 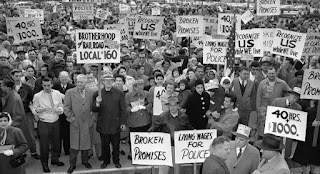 So there you have it, take it or leave it: enjoy your red-white-and-blue sprinkles on your donuts.   This doesn't concern you, now does it.