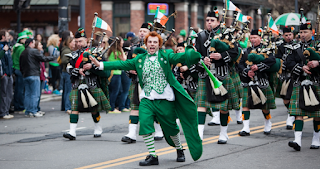 The first St. Patrick's Day Parade was held on this day in New York in 1762 by Irish soldiers serving in the British soldiers serving in the British army.  Early Irish settlers to the American colonies, many of whom were indentured servants, brought the Irish tradition of celebrating St. Patrick's feast day to America.  And what a feast day it was, from his journal writing in 1865, the Pennsylvania-born sergeant in the Irish Brigade, recounts:

St. Patrick's Day in the morning, and it is a fine morning, weather beautiful.  This is the day of the "Irish Brigade Jubilee"....  At ten O'clock the horses and riders came in...and arranged themselves in line, and then the word was given and away they go.  Some went over the hurdles and ditches, some flew the track and ran through the crowd of soldiers.  A sergeant of the 69th New York was trampled to death and half a dozen others badly wounded.  The Ambulance was hauling dead and wounded away all day.  The second round the Black Stallion of the Dutch Col fell over a hurdle and broke his neck and both arms of the Colonel.  They sent the Colonel to the Hospital, rolled the dead horse out of the way and went ahead as if nothing had happened.  Corporal Chisholm and myself sit in the Head Quarters carriage of General Meade on top of the hill four hundred yards away and we was hardly safe there, as one horse flew the track and nearly run through the carriage we sit in...On they went, horses flying the track, running over the spectators, faffing over the hurdles, into the ditches, breaking arms, legs, etc.  We soon got tired and came back to camp.  Never did I ever see such a crazy time.  I  will have to alter my mind if I ever go to see another Irish fair. 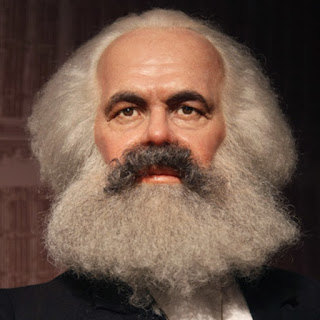 Oddly enough, on this day in 1883, the inventor of the word "capitalism" and arguably the world's most influential economist, Karl Marx, is buried in London's Highgate Cemetery.  The grave was virtually unmarked (a monument stands there now), and fewer than 20 people attended.  Not to fear though, in the true spirit of Marx himself, on this day in 1906, the term muckraking journalist is coined by President Theodore Roosevelt in a speech to the Gridiron Club in Washington.  The origin was ironic.  Speaking against sensationalist "yellow journalism," Roosevelt borrowed the term from John Bunyan's Pilgrim's Progress ("the Man with the Muckrake...who could look no way but downward"). However, "muckraker" soon became the nickname of great journalists who exposed the miserable abuses of the top 1 percent: forced child labor, predatory finance, marketing of unsafe food and drugs... etc.