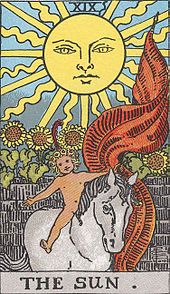 The 19th card of the Major Arcana, The Sun, can be considered the most favorable of all the Major Arcana cards; it symbolizes knowledge, vitality and good fortune, and promises esteem and reward.  The Sun posits attributes of clarity, harmony in relationship  and fine reputation; it does, however, also indicate negative qualities of pride, vanity and pretentiousness. 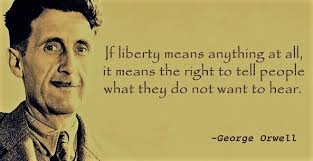 Oh what a glorious day it was indeed on this day in the wonderful year of our lord: 1984.   Yes, the year the world had been waiting for to see if George Orwell's famous prediction from his book by the same name, was true.  In Orwell's book, history was rewritten daily to keep people believing in everything and nothing at the same time.   Peace was War, Love was Hate, and Justice, well, unjust obviously.

I had just turned 20 that year and looked for the signs everywhere.   Ronald Reagan was president and there were signs.  For one, Mr Ray-gun (as we called him on the streets), hosted his 1984 Republican Convention in Dallas Texas.   Protestors came from everywhere to protest the Cowboy president who had used the Christian Church to get elected.   Reagan was the first to pretend to be a Christian to get it, before Reagan the church didn't take sides in politics... funny, I was a Christian back then too, but after that I decided I would rather burn in hell than follow Satan here on earth clothed in religion.    Really, it became obvious to me that that religion was nothing spiritual and everything to do with power -- I would spend the next twenty years proving this by studying the rise of the Christian church at the cost of real spirituality.   The faith we all know in our souls, not from the treat of eternal hell.
Getting back to 1984 and the Republican National Convention in Dallas Texas.  Thousands of protestors came from everywhere and they were loud and wanted the world to know that they did not support the Hollywood President trading a people's government for the corporate-greed government; however, you didn't know we were there in protest by watching the national media.  All you saw on television were the happy faces coming and going in-and-out of the convention, most disturbingly for me, Bruce Willis.  What was he doing there?

What Reagan had done was brilliant and would be used by all political parties going forward:   he had designated a "Safe Protest Zone."  That's right, an area where the protestors would be safe to express their god-given right to express their beliefs; only thing was, this designated spot was a mile away from the convention and any television cameras.  That's right, Sir Ray-gun had us on the banks of the Trinity River a few blocks from where Kennedy had been slain in the hot-ass sun to think about our evil protesting ways.   Free-speech had been converted into breached-speech and it has remained that way since.

Back then, I was certain this unprecedented act of using "Safe Protest Zone" as a move out of Orwell's 1984, little did I know that the real Orwellian machine was miles away in California being manufactured by one of us.  That's right, on this day in 1984, Steve Jobs gave us the first personal computer with a GUI interface (the mouse) which would make computers attainable to the masses.   And that machine was the monitor of big-brother today, along with cable news.

What I'm really trying to say here is: God is the answer -- wink.