Judgment Day and The Evil Doers. 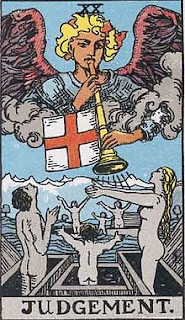 The 20th card of the Major Arcana shows The Judgment or Awakening in which people are urged to leave material considerations behind and seek a higher spirituality.  The card, depicting an angel blowing a trumpet, signifies that a new day, a day of accountability, is drawing.  t is a card which suggests we move beyond our ego and allows us to glimpse the infinite.  The danger is that the trumpet call for some heralds only exaltation and intoxication, a loss of balance, and indulgence in revels involving the basest instincts. 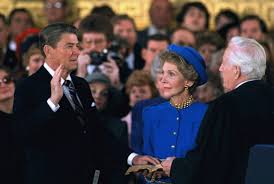 On this day back in 1981, after secretly negotiating with the Iranians to not release the US hostages until after the election to ensure Ronald Reagan would win the election over Jimmy Carter, the fifty-two American hostages who had been held hostage for 444 days, were released as planned: after Reagan was elected president. 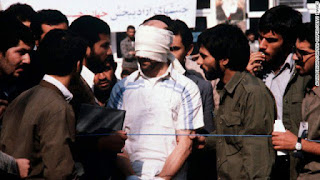 I have a personal connection to this evil-corruption of a free-election in the USA,  for I was one of the men serving in the US Navy (along with Steve Babylon) believing I was serving my country for its freedom and honesty.  My ship was deployed in the Indian Ocean for 314 days.   Consequently, it was for this period of service that I earned my first medal in the Navy which I also sent to Washing DC in shame after George Bush made the US the bad-guys by repealing fair-treatment of prisoners as outlined in the Geneva Convention... but that's another story.

While I was serving my country, Terry Waite was negotiating the release of these hostages.  Terry Waite was an Assistant for Anglican Communion Affairs for the then Archbishop of Canterbury, Robert Runcie, and was on an envoy for the Church of England.   That much we all know, what you don't know is the whole time, Terry Waite was in conversation with one, Oliver North who was serving in the US Military at the time, and who was secretly working with the Reagan election team.  North had Waite held the release negotiations until after the 1980 election so Jimmy Carter wouldn't get credit, and of course Reagan became president and the rest is history.  Oh, and as with any evil deed, the do-badder is rewarded, and North was given a job in the Reagan administration which ultimately led to North spear-heading the Iran-Contra where the same folks he had negotiate with to underhand the election of Jimmy Carter, would sells guns for drugs in South America (see American Made starring Tom Cruise for the poop on this).

And so the historic records show that on this day in 1981, minutes after Ronald W. Reagan's inauguration as the 40th president of the United States, the 52 American captives held at the U.S. embassy in Tehran, Iran were released because they were scared Shiite-less of the new president.

Nice try fellows, the truth is very corrupt, just as the history books try to tell us that Ronny Ray-gun ended the Cold War with the Soviet Union, the real truth is much more disturbing... the truth that much as the Nazis were defeated only to see Nazism thrive over the last fifty-years by our current Neo-Nazis' chanting "Lock Her Up," Russia won the Cold War by placing their man, one Donald Ego-Trip Trump in office who is secretly negotiating with Putin on their new Master Race, which, by-the-way, doesn't include Indians.  Go figure.

Wake up America.  It might not be too late, but probably is because of these evil-Christians revisionist running the country.  Speaking of which, ironically enough, one, Terry Waite, involving himself in another shady negotiation with Pro Iranian Lebanese Shiite Muslims, was himself taken prisoner on this same day in 1987.  He stopped fucking around after that and hasn't been seen since.

Yes, in the end, a chicken-shit like the rest of them.

Here is a photo of my medal I sent back because the country I once was willing to die for, had been made a nation of bad-guys and lies.

The Medal I Sent Back: 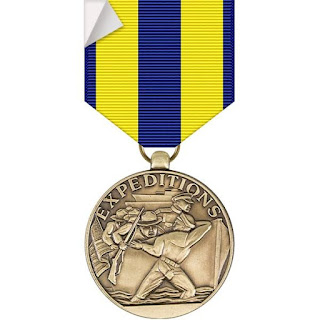 The Ship I Served On: 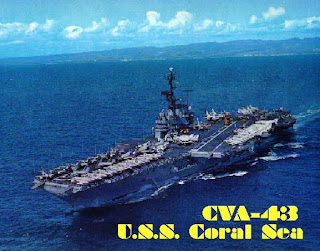 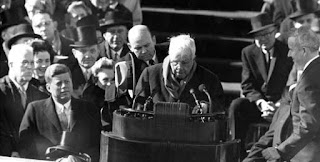 Speaking of presidential inauguration, how about this one:  1961, eighty-seven year old Robert Frost recites his poem "The Gift Outright" for U.S. president John F. Kennedy.   Although Frost had written a new poem for the occasion, titled "Dedication," faint ink in his typewriter made the words difficult to ready, so fate ordained that he read "The Gift Outright" from memory, instead.


The one he was going to read before the gods intervened:

"The glory of a next Augustan age


The one he did read:

By Robert Frost
The land was ours before we were the land’s.
She was our land more than a hundred years
Before we were her people. She was ours
In Massachusetts, in Virginia,
But we were England’s, still colonials,
Possessing what we still were unpossessed by,
Possessed by what we now no more possessed.
Something we were withholding made us weak
Until we found out that it was ourselves
We were withholding from our land of living,
And forthwith found salvation in surrender.
Such as we were we gave ourselves outright
(The deed of gift was many deeds of war)
To the land vaguely realizing westward,
But still unstoried, artless, unenhanced,
Such as she was, such as she would become.