The World Will End February 4th and Trump thinks it's fake news.

This just in from NASA:  a massive asteroid is headed right for us!   True.  It happens to be 0.7 miles wide and is speeding through space at 67,000 mph.  The asteroid will be here on February 4th.  It actually going to be the same distance from us as the moon is from us.

What would happen if it really does hit us?   Another ice age due to soot in the atmosphere for around 10 years.  It's what happened to the dinosaurs. 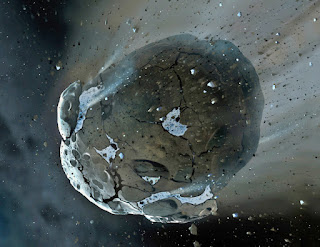 Of note, NASA doesn’t expect to have the ability to intercept an asteroid on a collision course with Earth until sometime after 2024.

And what is our president doing to prepare us for the end-of-the-world?   He has called all the news sources he disagrees with as fake news.   Fortunately, one Republican is calling it like it is: Sen. Jeff Flake of Arizona delivered an impassioned speech from the Senate floor, comparing Trump’s anti-press rhetoric to that of the murderous Soviet dictator Josef Stalin and calling on his colleagues to speak out against Trump’s “shameful, repulsive statements.” 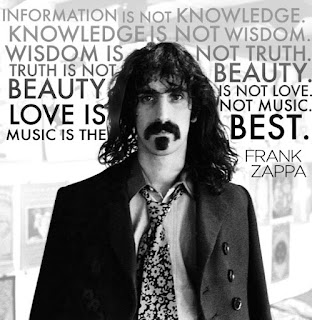 The mystery man came over
And he said "I'm outta sight!"
He said for a nominal service charge
I could reach nirvana tonight
If I was ready, willing and able
To pay him his regular fee
He would drop all the rest of
His pressing affairs and devote
His attention to me

The mystery man got nervous
And he fidget around a bit
He reached in the pocket of his mystery robe
And he whipped out a shaving kit
Now I thought it was a razor
And a can of foaming goo
But he told me right then when the top popped open
There was nothin' his box won't do
With the oil of Aphrodite, and the dust of the Grand Wazoo
He said "You might not believe this, little fella
But it'll cure your asthma too"

"I've got troubles of my own", I said
"And you can't help me out
So, take your meditations and your preparations
And ram it up your snout!"
"But I got the crystal ball", he said
And held it to the light
So I snatched it, all away from him
And I showed him how to do it right

I wrapped a newspaper 'round my head
So I looked like I was deep
I said some mumbo-jumbo, then
I told him he was going to sleep
I robbed his rings and pocketwatch
And everything else I found
I had that sucker hypnotized
He couldn't even make a sound
I proceeded to tell him his future, then
As long as he was hanging around
I said "The price of meat has just gone up
And your old lady has just gone down!" 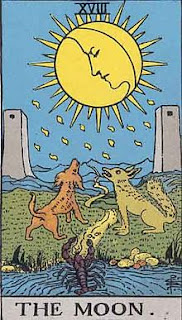 The 18th card of the Major Arcana is The Moon, which primarily represents the world of dreams, emotions and the unconscious.