After having been worked-up again last year by David Wilcock who said UFO Disclosure was going to happen in a few weeks -- I should have learned when the world didn't end December 21, 2012 as he predicted -- I was eventually let down because no governments came out admitting they had been in contact with aliens... until now!   Kind of.   It's still just a tease to get us used to the idea, but yesterday on CNN, A former Pentagon official who oversaw its highly secretive Unidentified Flying Object - yes, UFO - program said on CNN to host Erin Burnett that Americans may have been having visitors from afar for quite some time. And that the government has kept it quite on the hush-and-hush.

What I do find interesting about this is that only two-days ago on December 18th, a retired Navy pilot by the name of Fravor told ABC News: “I’m not crazy, haven’t been drinking. It was — after 18 years of flying, I’ve seen pretty much about everything that I can see in that realm, and this was nothing close.”

Fravor’s recounted a stunning encounter off the California coast in which he says something flying that appeared to be some 40 feet long and wingless, and flying at incredibly high rates of speed.
He was flying his F/A-18 fighter on a training mission off the Southern California coast when he recalls things started to get a little strange. He recalled Navy controllers on one of the ships below him on the water reporting that there were objects dropping from the sky from 80,000 feet and then going “straight back up,” Fravor told ABC News.

So there you have it, oh, plus at a White House Press briefing this week Secretary Sarah Huckabee Sanders said she hadn’t heard either way (if Donald Trump believes in UFO's), but she will check in on that and be happy to circle back. 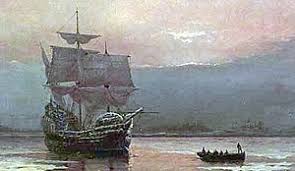 On December 21, 1620 the Mayflower landed at Plymouth Rock and so this date was celebrated in 1769 in honor of the pilgrims with a holiday called Forefathers' Day which turned out to be an ill-fated holiday that eventually fell into obscurity in favor of Thanksgiving.   Which, by-the-way, happens to fall on the old pagan Harvest celebration which was celebrated as Creator Day.   Yes, another pagan holiday gets stolen from our true history.   In case anyone is keeping counting.

Finally, the Winter Solstice happens tonight, enjoy.   I'll be at a  Pagan Yule Log Burning Solstice Ceremony in honor of it.  I'm sure there is one close to you, be there or be square.

The Wheel has turned once more, and
the earth has gone to sleep.
The leaves are gone, the crops have returned to the ground.
On this darkest of nights, we celebrate the light.
Tomorrow, the sun will return,
its journey continuing as it always does.
Welcome back, warmth.
Welcome back, light.
Welcome back, life.