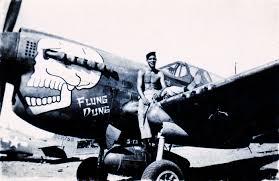 In 1941 on this day, the Flying Tigers, American pilots of fighting again Japanese in china during World War II, take to the air for the first time in their P-40 fighters, infliction heavy losses on Japanese bombers attacking Kunming.

On the flip side of that same year, a few days earlier (December 7th, 1941), the Japanese had invaded Pearl Harbor and of course you know the story there, of how the U.S. lost a lot of boats and people.   It's kind of bizarre then to realize that on December 8th of 1942, radar picked up an unidentified plane heading straight for Pearl Harbor from the direction of Japan.  Two fighters were instructed to investigate and quickly intercepted the mysterious plane. It would be the first sighting of the P-40 Ghost Plane which continues to appear in the area to unsuspecting flights.

Those who see the P-40 Ghost Flight all same the same thing: A pilot covered in blood and slumped over his instrument panel, briefly pops up and waves before his bullet-ridden fighter plane nosedives directly to the ground and crashes. 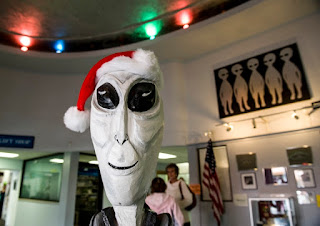 Lake City will be destroyed by a flood from the great lake just before dawn, Dec, 21, according to a suburban housewife.  Mrs. Dorothy Martin who says the prophesy is not her own.  It is the purport of many messages she has received by automatic writing, she says….  The messages, according to Mrs. Martin, are sent to her by superior beings from a planet called “Clarion.” These beings have been visiting the earth, she says, in what we call flying saucers.  During their visits, she says, they have observed fault lines in the earth’s crust that foretoken the deluge.    Mrs. Martin reports she was told the flood will spread to form an  inland sea stretching from the Arctic Circle to the Gulf of Mexico.  At the same time, she says, a cataclysm will submerge the West Coast from Seattle, Wash. to Chile in South America…
(Above excerpt from the book book, When Prophecy Fails


ON December 20th, in 1954, Dorothy Martin had her house filled with friends who had joined her to meet the Aliens from planet Clarion who had promised to come save them at midnight, because the world would be destroyed by a flood that night.   The group decided not to buy Christmas gifts or make New Year party plans that year.   They just waiting.

When the clock hit 12:01am, December 21, and there weren't no aliens, Keech got another message: since they had joined together with so much love, the aliens had called off the flood.   The world was saved!

The next week, Dorothy Martin was placed under psychiatric care to prevent the Oak Park police of charging her with “inciting to riot,” after a “boisterous crowd… blocked traffic on Christmas Eve outside the Martin home at 707 S. Cuyler Av., Oak Park.

“I felt a kind of tingling or numbness in my arm, and my whole arm felt warm right up to the shoulder,” Dorothy Martin had said, describing the way she would receive the messages. “Without knowing why, I picked up a pencil and a pad that were lying on the table near my bed. My hand began to write in another handwriting. I looked at the handwriting and it was strangely familiar, but I knew it was not my own. I realized that somebody else was using my hand.”


Dorothy Martin fled to Peru.  She lived there for several years, and spent time with the group “The Brotherhood of the Seven Rays”, founded by another channel and contactee, George Hunt Williamson.

She returned to the United States in 1961, and settled in Arizona. She had undergone a great amount of learning and transformation while in South America.  Her mentor Sananda was now no longer considered merely a member of an extra-terrestrial race from the planet Clarion.  Now known as Esu Sananda Kumara, or more specifically, Jesus Christ.

Dorothy Martin now called herself Sister Thedra, and in 1965 she founded “Association of Sananda and Sanat Kumara.”  She relocated to Mount Shasta in California, and continued to spread the messages that she was receiving from what she now called “the masters.”

In 1988, she moved the group once again to Sedona, Arizona.  They existed as a group of devotees awaiting messages from “masters” via the channel of Sister Thedra.  In 1992, Dorothy Martin passed away.  While no one has stepped up to replace her as channel,  the Association of Sananda and Sanat Kumara yet exists.  They can be contacted at the following address to receive their newsletter, Call to Arms.
2675 W. Highway 89-A
#454,
Sedona, AZ 86336

Dorothy Martin wasn't the only person in the 50's being contacted by the planet Clarion, so was a man by the name of Truman Bethurum.  He was visited eleven times by the visitors and   repeatedly conversed with its female captain, Aura Rhanes.  He recounted this experience in his book
Messages from the People of the Planet Clarion: The True Experiences of Truman Bethurum. 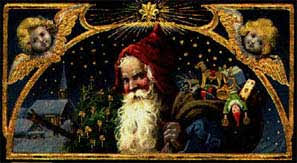 Today is the Druid festival of Alban Arthuan, or Arthur's Light.  It's the traditional birthday of King Arthur, and money and gifts are bestowed on the poor.  The Winter Solstice, or first day of winter (also known as Yule, Winter Rite, and Midwinter), is the time of new beginnings when pagans reflect on the past and formulate future plans.