So begins our Esoteric look at John Dee and his diary 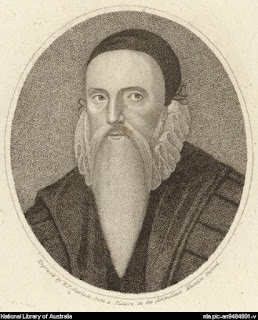 John Dee begins his conversation with the spirits.

Yes, John Dee was tired with the routine of his lives studies in mathematics, alchemy, the kabbalah, astrology, and magic (to name a few), and so decided to go straight to the source by scrying through a crystal ball on this day in 1581.

In his article in the Journal of International Philosophy, No.5 2016,  TAKEUCHI Dai, tells us that, "While the first record of the scrying sessions undertaken by Dee was taken on December 22, 1581, he had already employed a scryer in 1579…Dee employed at least four different scryers. Among them, Edward Kelly (1555-1597).... Kelly would kneel down in front of his desk upon which a shew-stone was set and fell to prayer and entreaty while gazing at the stone. During this time, Dee would withdraw to his Oratory and entreat the appearance of angels with prayer. About fifteen minutes later, Kelly would “have sight of one in the stone. He would then proceed to provide a point-for-point oral report on everything he saw and heard. Sitting at a different table, Dee recorded what was reported and posed all sorts of questions to the summoned angel or spirit.

The angels that communicated through Kelley included the four traditional archangels Michael, Gabriel, Raphael and Uriel, plus Annael, who Trithemius listed as the archangel ruling the period in which Dee lived, and Levanael (angel of the Moon). Other spirits or angels included Madimi (and her Mother), Murfridi, Ath, Solgars, Jubanladaece, Galva’h, Ilemese, Mapsama, Ave, Nalvage, Panlacarp, and Aphlafben, and disruptive spirits like Barma, Morvorgran and Ganislay. Frequently the communicant was just identified as ‘a voice’ (or vox).

These angels/spirits often delivered prophecies on Central European politics, as well as providing alchemical advice, and a number of tedious sermons and rants about the wickedness of Dee, Kelley or their several potential patrons.  Dee was particularly interested in the possibility of an immanent Second coming and the setting up of a new Kingdom of God.