From the heart of Madame Blavatsky 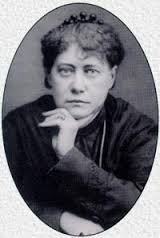 It was a day not unlike today that they took Madame Blavatsky away.  Russian born, she was a mystic.  From 1848 to 1858, she traveled the world without a man.  She entered Tibet to study with the Masters for two years, and in 1871 she went to Cairo where she founded the Society Spirit for occult phenomena along with Emma Cutting (later Emma Coulomb).  In 1879 Madame Blavatsky emigrated to New York where she impressed all with her psychic feats.  She was no one-trick pony, she did it all:  mediumship, levitation, out-of-body projection, telepathy, clairvoyance,  and clairsentience.

Her first book, Isis Unveiled, appeared in 1877.  In the preface she stated that the book was "a plea for the recognition of the Hermetic Philosophy, the ancient universal wisdom."  And no doubt it was, for the Hermetic Society which still exist today, began with her book.

Just goggle Madame Blavatsky and you'll find pages and pages of opinions, good and bad.  In his book, "The Spear of Destiny," Trevor Ravenscroft writes that the Madame was used by the Alister Crowley's "Golden Dawn" group along with soon-to-be Nazis party leaders to raise demons out of her...  well...  private part.   I don't know about that, but I do know she was a great woman in a time where woman weren't allowed to vote or have organisms, and so if she did materialize something good or evil out of her vagina, more power to her.