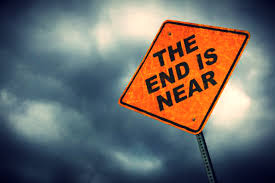 So, David Meade, a numerologist, is predicting the end-of-the-world this Saturday (Sept 23, 2017).

He is doing this based on the Bible's Book of Revelations, specifically Revelation 12:1–2, which reads:


A great sign appeared in heaven: a woman clothed with the sun, with the moon under her feet and a crown of twelve stars on her head. She was pregnant and cried out in pain as she was about to give birth.

Meade interprets this passage as referring to the constellation of Virgo, which is often depicted as a woman. Currently, Virgo advances through the sky ahead of the moon, and with the sun. Ahead of the constellation are the nine stars of Leo, along with the planets Mercury, Mars, and Venus. Meade believes these stars and planets are the "crown of twelve stars" in the prophecy.

Fortunately for us, he did back step by saying: "The world is not ending, but the world as we know it is ending" on September 23. "A major part of the world will not be the same the beginning of October."

I'll get back with you on Sunday to see if the guy was right or wrong.