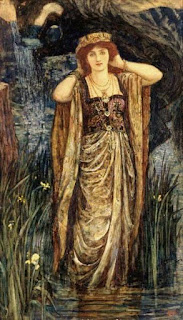 In Alfred, Lord Tennyson's Idylls of the King, King Arthur's court is faux medieval and high Victorian at the same time.  Any work of Victoria's poet laureate couldn't be anything else.  But what do we know about a historical King Arthur?  There are dozens of books about Arthur and his court.  Was Arthur a sixth-century Romano-Celtic chieftain?  In 1191, monks discovered the bones of Arthur and Guinevere in a ruined abbey on Glastonbury Tor.  They took them to King Henry II, but the bones have long since disappeared.  Were they genuine?  Was the Arthurian court pagan, christian, or both?  does it matter?

Was there a real Guinevere?  It is possible that she is a Welsh triple goddess, for variants on the Arthurian legend say he married three women, all named Guinever.  The ancient tradition says that the king must "marry" the land.  If he is happy and well, so are the land and the people, if he is wounded, so are they.  This is vividly shown in John Boorman's chessy but fascinating film, Excalibur.

Early in Lerner and Lowe's musical Camelot, Guinevere sings "The Merry Month of May" and invites several knights to ride with her.  Then she meets Lancelot.  What do people always remember about guinevere?  She betrays Arthur, whom she loves, by sleeping with Lancelot.  Like other Celtic goddesses (Maeve and Blodewedd), Guinevere can make a king through sacred marriage and unmake him by choosing a new hero.
(Ardinger.B, "Pagan Every Day" pg 123)