Straight From The Quija's Planchette. 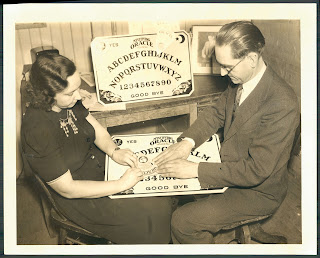 Good morning boys and girls.  Today, we will talk to the Quija board.  Yes, that strange magic board that some consider a game and others, well, a gate to hell -- as if such things existed.  I, for one, believe the Quija board  is a place for mischievous spirits to hang out and fuck with us, you know, beggars on the side of the road holding a sign, "Please Help, Spiritual Veteran Needs Money, God Bless, Support The Napoleonic Troops."

Unfortunately, the history of the Quija board is as elusive as its "Yes" and "No" answers to serious questions like, "Will The World Ever End?"  "NO."   "Are you sure?"  "YES."

The Planchette -- French word for "little plank" -- originated in Europe in the 1850's.  Although it is not clear how it was used back then,  it wasn't the way we use it now -- most likely for automatic writing.  It wasn't until a few years later that a US company under the direction of Charles W. Kennard and sweat of William Fuld, would add the alphabet board to make the Quija as we know it.

The word "Quija" itself is a mysterious.  (Alternately pronounced wee-JAA and wee-GEE).   It was originally defined as "good luck" by Charles W Kennard -- the money guy.  That was marketing bullshit -- some things never change.  William Fuld -- the sweat guy -- after he split working for Kennard to make millions on his own version of the Quija, said "Quija" stood for the French and German words "yes."  I personally believe somewhere along the way, the "Quija" simply named itself.  "Is That Right Quija?"  "YES."  "Really?"  "YES!"

Frank Gaynor's 1953 Dictionary of Mysticism states that primeval boards of different shapes and sizes were used in the sixth century before Christ.  This claim has been hard to trace and I tend to lean more towards the Lewis Spence's 1920 Encyclopedia of Occultism, where he says: "As an invention it is very old.  It was in use in the days of Pythagoras, about 540 B.C.  According to a French historical account of the philosopher's life, his sec theld frequesnt séances or circles at which 'a mystic table, moving on wheels, moved towards signs, which the philosopher and his pupil, Philolaus, interpreted to the audience as being revelations supposedly from the unseen world.'"

So there you have it boys and girl straight from the Quija's Planchette.

-- Oh, by the way, that William Fuld guy who made millions off of the Quija board fell off a six-story building to his death kind of freakishly on February 24th, 1927 while supervising a flag-pole replacement on his building.  Not that it matters, but it DOES! 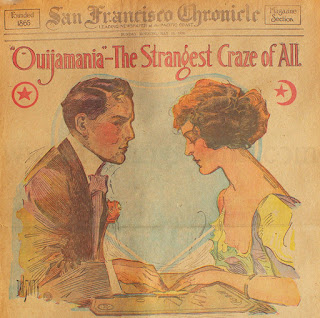