Easter is a moveable feast.  It's left over from the lunar calendar and occurs on the first Sunday after the first full moon after the spring equinox.  All three of the standard-brand religions have moveable feasts.  Nearly every Jewish holy day, for example, is lunar, as are the Moslem holy days.  The feast days of Hindu gods and goddesses are likewise moveable, and so are holidays celebrated according to the old Chinese calendar.
(Ardinger, B., "Pagan Every Day." pg 102) 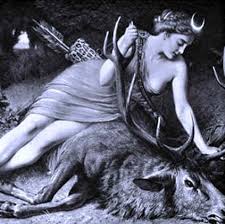 On this day each year, cross-inscribed loaves of bread are traditionally baked in honor of the Roman goddess Diana.

In Greece, branches of evergreen, myrtle, or bay were worn by children on this day for protection against the venomous evil eye.

In Armenia, the goddess Anahit is honored annually on this day with a sacred festival.  She is a deity of both love and lunar power who dwells within the silver light of the Moon.