Yes, the Bible is a good record for supporting sin.

A father and son accused of raping a teenage girl over a three-year period and keeping her shackled in a basement have made it clear that they don’t have faith in the law or in the people who practice it. When they face an Ohio jury as they defend themselves against criminal charges that carry long prison sentences, they will rely on one book: The Bible (Washington Post).

You know, by using the Bible  in defense of "rape," Timothy Ciboro and his son, Esten Ciboro, are keeping good company.  Christian's have been rapping in the name of Christ for centuries.  As I recently wrote in an article called: Christopher Columbus Was A Pig, the beloved Christian Explorer wrote about raping an Island Woman in the New World in his ships log:

“ While I was in the boat I captured a very beautiful Carib woman, whom the said Lord Admiral gave to me, and with whom, having taken her into my cabin, she being naked according to their custom, I conceived desire to take pleasure. I wanted to put my desire into execution but she did not want it and treated me with her finger nails in such a manner that I wished I had never begun....”

And why not, the Bible is filled with passages on rape:

(Deuteronomy 22:28-29 NAB)
If a man is caught in the act of raping a young woman who is not engaged, he must pay fifty pieces of silver to her father.  Then he must marry the young woman because he violated her, and he will never be allowed to divorce her.

(Deuteronomy 21:10-14 NAB)
“When you go out to war against your enemies and the LORD, your God, delivers them into your hand, so that you take captives, if you see a comely woman among the captives and become so enamored of her that you wish to have her as wife, you may take her home to your house.  But before she may live there, she must shave her head and pare her nails and lay aside her captive’s garb.  After she has mourned her father and mother for a full month, you may have relations with her, and you shall be her husband and she shall be your wife.  However, if later on you lose your liking for her, you shall give her her freedom, if she wishes it; but you shall not sell her or enslave her, since she was married to you under compulsion.”

(Zechariah 14:1-2 NAB)
Lo, a day shall come for the Lord when the spoils shall be divided in your midst.  And I will gather all the nations against Jerusalem for battle: the city shall be taken, houses plundered, women ravished; half of the city shall go into exile, but the rest of the people shall not be removed from the city.

Then there are the many child molestation's done in His name by the Catholic Priest, not to mention the womanizing rants and self-incriminating remarks of our current President as he boasted to a TV host that he just "kissed" and "grabbed" woman as he wished, albeit, he did use Tic Tacs.

So, yes, I see why these two guys would ask for the Bible in their defense of rapping a woman. 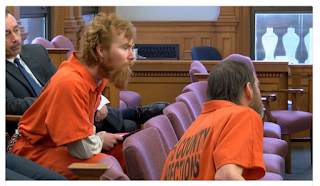