Churchill bust back in the Oval Office 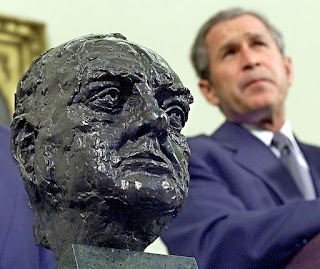 Interesting that President Donald Trump has moved the bust of Winston Churchill back in the oval office of the White House.   President Obama had removed it for the bust of Martin Luther King JR.

The Bloodline itself isn't a problem, but how it was used, is.  And Winston Churchill definitely used it as most of the Royal Class has with no respect for the people of which they consider commodities.  In his book "Children of the Days, Eduardo Galeano explains it perfectly:

In 1919, when presiding over the British Air Council, he (Churchill) had offered one of his frequent lessons in the art of war:
"I do not understand this squeamishness about the use of gas...I am strongly in favor of using poisoned gas against uncivilized tribes.  The moral effect should be so good...and would spread a lively terror."
And in 1937, speaking before the Palestine Royal Commission, he offered one of his frequent lessons on the history of humanity:
"I do not admit that a great wrong has been done to the Red Indians of America or the black people of Australia...by the fact that a stronger race, a higher-grade race...has come in and taken their place."

There is no disputing the fact that Winston Churchill represents racism at its most disturbing root.   President George Bush had it in the Oval Office and must have found some kind of reassurance in it as he murdered thousands of people with his "fake" war.   Apparently, Donald Trump plans to do the same.

Anyway, today it January 25th; on this day in 1965 Winston Churchill passed away.