Day of the Triple Goddess 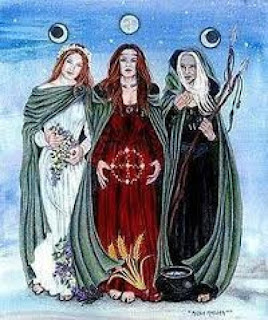 The Day of the Triple Goddess is observed by many Wiccans and Neo-Pagans of various traditions on January 6th each year.  This is a time to pay homage to the Goddess in Her three aspects which consist of the Maiden or Virgin (represented by the new and waxing moon), and the Crone (represented by the waning and dark of the moon).

The Goddess is recognized around the world in many trinities, such as the Morrigan of Ireland who is personified by Ana (the Virgin), Babd (the Mother), and Macha (the Crone); and the ancient Greek lunar trinity of Artemis/Selene/Hecate, just to give two examples.

The following Triple Goddess Ritual can easily be adapted to suit whichever Goddess trinity you feel most drawn to.

Place three candles (one white, one green, and one black) upon your altar.  Light the white one first in honor of the Goddess in Her Maiden aspect, and say:

I light this candle for the Maiden:
A Goddess of Beginnings
And the birth of Spring.
She is fertility, She is Growth.
She reflects the mystical beauty
Of the sacred woman-spirit

Next, light the green candle in honor of the Goddess in Her Mother aspect, and say:

I light this candle for the Mother:
She is nurturing and protecting.
She is the giver of life, the divine.
Matrix of never-ending mystery.
With her light of white she heals.
Of summer's sweetness.

Finally, light the black candle in honor of the Goddess in Her Crone aspect, and say:

I light this candle for the crone:
With wisdom she rules
Like ancient queen.
She guides us
When our Autumns
In the world end.

So Mote It Be!