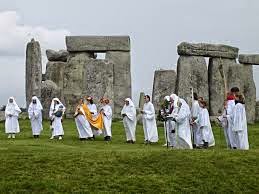 The secret doctrines of the Druids were much the same as those of the Gymnosophists and Brahmins of India, the Magi of Persia, the priests of Egypt, and of all other priests of antiquity. Like them, they had two sets of religious doctrines, exoteric and esoteric. Their rites were practised in Britain and Gaul, though they were brought to a much greater perfection in the former country, where the Isle of Anglesey was considered their chief seat. The word Druid is generally supposed to be derived from " an oak ", which tree was particularly sacred among them, though its etymology may also be found in the Gaelic word Druidh, ' a wise man ' or ' magician.

Their temples, wherein the sacred fire was preserved, were generally situate on eminences and in dense groves of oaks, and assumed various forms.

The adytum or ark of the mysteries was called a cromlech, and was used as the sacred pastos , or place of regeneration. It consisted of three upright stones, as supporters of a broad, flat stone laid across them on the top, so as to form a small cell. Kit Cotey's House, in Kent, was such a pastos. Considerable space, however, was necessary for the machinery of initiation in its largest and most comprehensive scale. Therefore, the Coer Sidi, where the mysteries of Druidism were performed, consisted of a range of buildings, adjoining the temple, containing apartments of all sizes, cells, vaults, baths, and long and artfully-contrived passages, with all the apparatus of terror used on these occasions. Most frequently these places were subterranean.

The system of Druidism embraced every religious and philosophical pursuit then known in these islands. The rites bore an undoubted reference to astronomical facts. Their chief deities are reducible to two, — a male and a female, the great father and mother, Hu and Ceridwen, distinguished by the same characteristics as belonged to Osiris and Isis, Bacchus and Ceres, or any other supreme god and goddess representing the two principles of all being. The grand periods of initiation were quarterly, and determined by the course of the sun, and his arrival at the equinoctial and solstitial points. But the time of annual celebration was May-eve, when fires were kindled on all the cairns and cromlechs throughout the island, which burned all night to introduce the sports of May-day, whence all
the national sports formerly or still practised, date heir origin. Round these fires choral dances were performed in honour of the sun, who, at this season, was figuratively said to rise from his tomb. The festival was licentious, and continued till the luminary had attained his meridian height, when priests and attendants retired to the woods, where the most disgraceful  were perpetrated. But the solemn initiations were performed at midnight, and contained three degrees, the first or lowest being the Eubates, the second the Bards, and the third the Druids. The candidate was first placed in the pastos bed, or coffin, where his symbolical death represented the death of Hu, or the sun ; and his restoration in the third degree symbolized the resurrection of the sun. He had to undergo trials and tests of courage similar to those practised in the mysteries of other countries, and which therefore need not be detailed here.

The Druids taught the doctrine of one supreme being, a future state of rewards and punishments, the immortality of the soul and a metempsychosis... Their doctrines were chiefly those of Pythagoras.

Their authority in many cases exceeded that of the monarch. They were, of course, the sole interpreters of religion, and consequently superintended all sacrifices; for no private person was allowed to offer a sacrifice without their sanction. They possessed the power of excommunication, which was the most horrible punishment that could be inflicted next to that of death, and from the effects of which the highest magistrate was not exempt. The great council of the realm was not competent to declare war or conclude peace without their concurrence. They determined all
disputes by a final and unalterable decision, and had the power of inflicting the punishment of death. And, indeed, their altars streamed with the blood of human victims. Holocausts of men, women, and children, enclosed in large towers of wicker-work, were some- times sacrificed as a burnt-offering to their superstitions, which were, at the same time, intended to enhance the consideration of the priests, who were an ambitious race delighting in blood. The Druids, it is said, preferred such as had been guilty of theft, robbery, or other crimes, as most acceptable to their gods; but when there was a scarcity of criminals, they made no scruple to supply their place with innocent persons. These dreadful sacrifices were offered by the Druids, for the public, on the eve of a dangerous war,
or in the time of any national calamity ; and also for particular persons of high rank, when they were afflicted with any dangerous disease.

The priestesses, clothed in white, and wearing a metal girdle, foretold the future from the observation of natural phenomena, but more especially from human sacrifices. For them was reserved the frightful task of putting to death the prisoners taken in war, and ndividuals condemned by the Druids ; and their auguries were drawn from the manner in which the blood issued from the many wounds inflicted, and also from the smoking entrails. Many of these priestesses maintained a perpetual virginity, others gave themselves up to the most luxurious excesses.

As the Romans gained ground in these islands the power of the Druids gradually declined ; and they were finally assailed by Suetonius Paulinus, governor of Britain under Nero, A. D. 61, in their stronghold, the Isle of Anglesey, and entirely defeated, the conqueror consuming many of them in the fires which they had kindled for burning the Roman prisoners they had expected to make — a very just retaliation upon these sanguinary priests. But though their dominion was thus destroyed, many of their religious practices continued much longer; and so late as the eleventh century, in
the reign of Canute, it was necessary to forbid the people to worship the sun, moon, fires, etc. Certainly many of the practices of the Druids are still adhered to in Freemasonry ; and some writers on this order endeavour to show that it was established soon after the edict of Canute, and that as thereby the Druidical worship was prohibited in toto, the strongest oaths were required to bind the initiated to secrecy.