The "Bitch Slap" Heard Around the World as Seen From an Esoterist.

Okay people, relax.  Just because the Shirtless Warrior (Vladimir Putin) has unleashed the greatest force of evil known to the world in what appears to be his momentary lapse of reasoning, we don't all have to give in to it.  Case in point, in today's news there seems to be lapse of reasoning everywhere.  First, a hockey player slaps a puck out of frustration at a referee.

Then a 9th grad high school fight turns Satanic when a kid stabs another kid in the face with a lead pencil.

And most notable, on live TV right before our eyes, Will Smith Bitch Slaps Chris Rock to a stunned audience, in what I call "The Bitch Slap Heard Around the World -- copyright 2022)"

In today's post let's focus on the "Bitch Slap Heard Around the World -- c2022) since it is the most notable.  If you have been so deep in your Hermetic studies you missed it, what I am talking about is this year's Academy Award show where the famous actor Will Smith slaps the face of another famous actor/comedian named Chris Rock who told a joke about Smith's wife.  It was dysfunctional, to say the least, and as Chris Rock joked immediately afterwards: "The Greatest Night in TV, for those seeking violence" -- he left off the "seeking violence" part.  But it was there.

To the uninitiated eye, the Bitch Slap appeared to be one of those momentary lapses of reasoning we all experience in life at one time or another, usually from a few too many drinks at a party, or for some unknown reason to me, at a wedding -- as I learned from my years as a wedding videograhpher, but that's a story for another time.

What we are talking about today are the forces that lie within.  Yes, the forces at play in our everyday lives which are more complex than just good vs. evil; forces which are in each of us at any given moment of time, and can appear in us as sudden as a cough or sneeze.  What I am trying to say here is that no person, deity, god or goddess, on this Earth is completely good or evil, for there are no absolutes of good and evil in a world controlled by the Demiurge (Satan, to the uninitiated), and the controlling forces of good and evil can come out of all of us at any moment.

In my Buddhist faith we call these forces "the ten worlds," which go from the Hell to Heaven, and can play out in our lives a thousand times a day, a thousand times second, and our goal as good Buddhist is to elevate ourselves to the higher worlds as often as possible -- there's a whole lot more, but that's the Cliff Notes version.

What we saw in The Bitch Slap Heard Around The World -- c2022, was more than the momentary lapse of reasoning of man who had too many drinks at a wedding.  What we saw was a man propelled by the lower forces of the universe to act out in their honor.  Call them demons, evils spirits, Sasquatch, whatever, it doesn't matter, they are in us all and if we are not careful, they will control us to do things like, oh, I don't know, drive away after real ending a parked car to avoid the insurance cost, keeping that extra twenty dollar bill the clerk gave you back which might cost him his job, removing that price sticker... well, you get my drift.  The lower forces are in us everyday and at any moment will have us bitch slapping someone on broadcast television if we're not careful.

On the other side of the spectrum are the higher worlds.  The ones that always make us feel right when we answer to them.   You know, waiting for the driver of that parked car you hit so you can give him/her your insurance information, or giving that clerk back the extra money he gave you, or, in Chris Rock's case, not bitch slapping back the Sasquatch who just bitch slapped you on national TV.  Yes, Chris Rock stood down and took it like an angle.  I say Angel for the true angels and devils of the earth are you and I.  As John Lennon said, "There ain't no guru going to come from the sky to save you."  We are the Angels and Devils of the world, or better said, the avatars that act out in their honor.  Which means Will Smith was controlled by a lower force on national TV in an one-act play for you and me put on by the gods to remind us of their power.

Which brings me back to the Shirtless Warrior, Vladimir Putin.  Was it just a momentary lapse of judgment that caused him to bitch slap the world by invading his neighboring country and starting a war?  Slippery slope?  Maybe, but didn't the one-act play also show us the possibilities of peace and love in all of us.  On a deeper level I believe it does, for in Hollywood legend, Chris Rock is usually the fowl mouthed comedian answering to the lower gods, while Will Smith is always the wholesome good guy.  Which begs the question, if good guys can be bad and bad guys good, can't Vladimir Putin listen to the higher forces within him and stop his senseless killing? 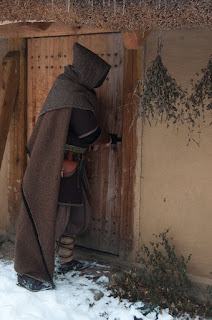 The old Pagan ritual of "carrying death away" is carried out in certain regions of Germany on this day.  In celebration of Winter's demise, special straw dolls are burned in sacred bonfires or are "drowned" in sacred wells.

The Sun was warm but the wind was chill,
You know how it is with an April day
When the Sun is out and the wind is still,
Your one month on in the middle of May.
But if you so much as dare to speak,
A cloud comes over a cloud lit arch,
A wind comes off a frozen peak,
And your two months back in the middle of March.

Greatness sometimes takes outside inspiration as well as outside aid.  Born in Colmar, Alsace, on this day in 1834, the sculptor Fredric Auguste Bartholdi became inspired while attending a dinner at the 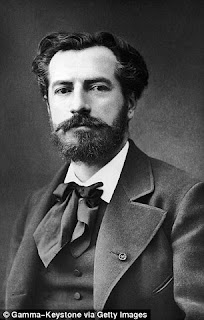 home of Lefebvre de Laboulaye in 1865.  His host suggested that he sculpt a symbol of liberty.  Traveling to America in 1871, Bartholdi saw that New York Harbor was the perfect place to erect his vision:  a cross between the Colossus of Rhodes and the monumental statues that lined Egypt's Nile River.  Although the French government was willing to pay for Barholdi's grand sculpture, the American government had to ask for public donations to fund the construction of the foundation and pedestal.  After six years of appeals, work began on the pedestal, but it wasn't finished until publisher Joseph Pulitzer took on the job of fundraising.  Bartholdi's Statue of Liberty was completed in 1886.  (The statue itself was finished in 1884, although its arm was not properly attached until its restoration in 1984.) 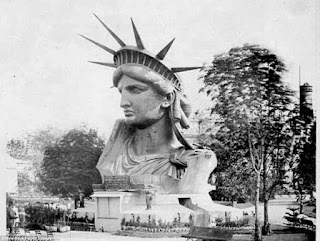