Speaking of the Deity most will be honoring this Good Friday. 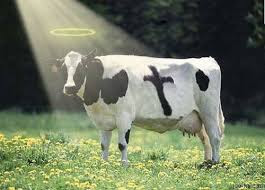 That's right, in honor of Tellus on this day each year a pregnant cow was sacrificed and the unborn calf burned in a bonfire to ensure the fertility of the crops.  I know it sounds gruesome, but compared to today's fast-food burger feast being held 365 days a year around the clock, one pregnant calf a year is a little thing.

The purpose of the sacrifice was to assure the fertility of the planted grain already growing in the womb of Mother Earth in the guise of Tellus, to whom the sacrifice was offered.  Along with the pregnant cow being sacrificed, the unborn calf was burned in a bonfire at the wild party afterwards -- that's just how we pagans did it back then. 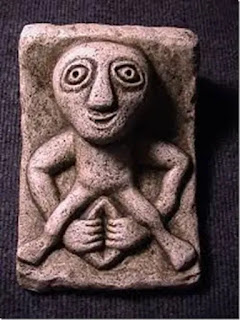 Another important thing to know is that this celebration was run by woman nuns, or Vestals, and as Shirley Two Feathers tells us on her Pagan calendar: the unborn calf is a liminal or mediating being; not yet born, but living; not a full-fledged victim, but sacrificed. The role of the Vestals emphasizes their importance in linking through the ritual reuse of elements the Earth’s fertility, the health and safety of the flocks, and the security of the city, including and especially its military security against invasion.

A similar spring festival in China was witnessed in 1804 by the British ambassador to China, John Barrow.  At the temple of Earth, a large porcelain cow was carried in procession then shattered to reveal several small cow-images inside.  These were distributed among the people as tokens of a good growing season.  Fowler speculated that the Chinese rite was in origin an animal sacrifice similar to that of the Fordicidia.

Today, we don't kill cows anymore, but we do do something good for our Earth Mother like plant a tree, or pick up some trash.  She'll reward us for our effort.  Try it and let me know your outcome.

Conversely, on this day of the year in the city of Kawasaki, Japan, the ancient deities associated with sexuality and human reproduction give their sacred blessings and encouragement when evoked to couples who wed late in life, or men like me who suffer declining potency -- but I'm not complaining: I am coming back as a woman, it is a bitch being a man who cries at weddings.