How I Plan to Save America Before This Cancer Kills Me. 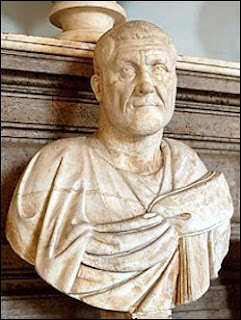 I got to thinking last night, 'who's going to want to read about my cancer,' but then I thought, who wants to read about the Fall of Rome?  Everyone, because it is happening again in the US.  Case in point, around the 3rd century, Rome had become politically divided and so there was infighting which caused territories to split off only to be reclaimed by the Roman army.  Seeing this the Roman senate increased its military spending to be over half of its tax collections, and Support the Troops became the word of the day.  And to keep its massive military power it kept taxing the people more and more in the form of fees on water, toll roads, traffic violations, etc., while demanding little from it's wealthy 1%.   No shit.  The USA is on the identical path of Rome.

Just like we had a civil war around 1863, Rome had a terrible civil war around 135 AD.  The military leader who won that war was general Septimius Severus, who became the War Machine leader.  He took all the money once used for public education and put it in more war machines to show its power to the world.  But the problem wasn't the world, the problem was the Roman politicians who blamed each other for the problems of the country while excusing the wealthy oligarchs who didn't want to improve the streets or schools, but only be left alone to make more money.  Finally, then as now the problems of the day were blamed on the liberal gardeners who wanted to plant pretty smelling flowers around the collisium to help cover the stinch of spilled gladiator blood.

As simple as is it to say, it is true: together we stand, divided we fall.

Rome’s enemies knew this and so do ours.

I only have a short time left in this existence, so let’s get this shit right before I return!

That’s how we each need to start, then we can talk about the little things.

Our enemies are watching.

On another good note, on this day in 1898 the first American cancer lab was established in New York State, and since then they have cured, well, I'll save that over the course of my chemo treatment.  So don't go away, this is just getting interesting as I try to save America before I die.