The True Message of Fátima


As I told you in yesterday's post, Viola (my spirit guide) told me that peace was coming in Ukraine.  I didn't know what she meant at the time, but now I do, for in today's news it is reported that Pope Francis led the world's Catholic bishops on Friday in praying for peace between Russia and Ukraine.

Pope Francis spoke of "scenes of death" in which "bombs are destroying the homes of many of our defenseless Ukrainian brothers and sisters" and of "a cruel and senseless war that threatens everyone."

Way to go Pope, I am so proud of you.

In his homily, the Pope spoke about the century-old apocalyptic prophecy that was given to three children in Fatima Portugal back in 1917.  Yes, the "Fatima Incident."  In case you don't know it, here it is in 30 seconds: 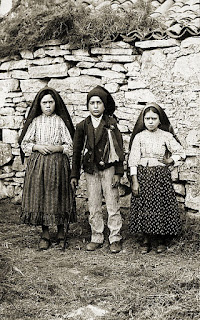 On May 13, 1917, around noon there were three peasants children attending to their sheep when out of the sky appeared a beautiful woman which they took as Mother Mary from their School teachings -- since this was before television and the internet, it could have been  a UFOs or the an other feminine goddesses that predated the Virgin Mary myth -- more on this later.

The children told the priest that they had seen visions on three different days.  The vision were written and saved by the Catholic church, and are of souls burning in hell, the the end of WWI, the fall of Communism, and the killing of religious and lay people by soldiers.

End of The Three Secrets of Fatima" in 30 seconds.

Now, this is the story that has been handed down to us by the Catholic church, for the children were never allowed to tell their story to anyone else.  And so, we will never know what the children actually saw, or what they indeed told the priest at the time, but my spirit guides tells me it is a different one than the church broadcasted to the world.  Where the children talked about peace, the church wrote penance.  Where the children said that we all needed to come together in love, the church wrote, we must all be consecrated in the Catholic faith. The pattern continues up to the foretelling of the attempted assassination of Pope John Paul II in 1981. Hogwash.

The Fatima Vision was a heavenly message for us all by a benevolent feminine goddess, but was hijacked by the Catholic church to help them grow their church.  Now, I don't mean to point out the Catholic church on this one for all churches do it, at least in my experience.  It's the business side of it which they all have.

Finally, my spirit guide tells me that the feminine goddess that presented herself to the children in Fatima that day, was an early prophesy of the change we are experiencing in the world today from leaving the masculine Pieces period for the age of Aquarius which is happening now.  The masculine days of world wars are over. The world will not have it.  We will come together to stop the evil that is at the root of the Russian invasion, as one body in love and peace.  This is the true message of Fatima that day.  This is the real reason Pope Francis spoke of it in my humble opinion.

Thank you again Francis, today, all is forgiven.