The Cathars, To Be or Not To Be

To be a Cathar or not to be a Cathar, that is definitely not the question, for the mega church at the time of the Cathars was run by a Pope named Innocent -- no shit, that was his name, Pope Innocent III -- had all the Cathars killed by his Dark Knights in Satan's Army warriors. 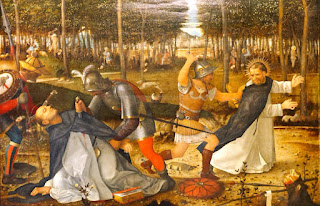 Well, not all the Cathars were killed, some were given a chance to repent, in which case they were made to walk around town with a yellow cross on their chest so the town's people knew where to spit -- sad, but Hitler would do the same to Jews 700 years latter by having them wear a yellow Star of David, is that where Mad-Dog Adolf got the idea?  No one knows, but what we do know that in the year 1209 CE 20,000 Men, Woman, and Children were slaughtered to death by the Pope's army which was led by a general who famously said, “Kill them all, the Lord knows who are His” -- a saying that years later would come to be known as "Shock and Awe" by the presidents George Sr. and George Jr. Bush, respectively -- if naming your son George Jr. isn't a reason for a class war then I don't know what is.

So what were the Cathars guilty of that would have them wiped off the face of the earth? A fate worse than what the Pope had yet to do to the Pagans or other, smaller Christian sects?  Well, simply stated: the Cathars were guilty of being Buddhist.

No shit.  They believed in reincarnation, silent meditation, and most disturbing, I would venture to say, powerful woman leaders, oh no!

I joke a little, but the innocent words of which I speak, are true.

The Cathars believed there wasn't one god but two.  For those of you who didn't take bible study as an elective for the easy test, as I did, two gods equals Dualism, and Dualism means there is a good god and a bad god.  The Cathars believed the good god was in heaven, and the evil god -- who they called the Demiurge -- ruled here on earth or as they liked to call it, hell.

The Cathars believed we were destined to repeat a cycle of death and rebirth here on earth until we could recognize Satan and his followers by name, and deny them our souls, as I am doing here on EsotericDaily.com.

Finally, of all the Christian hating things the Cathars were doing, I believe the big thing that got them killed off was their nonviolent teachings which were catching on with the peasants who were getting tired of fighting the Popes holy wars for holy shit to eat, oh, and then there was that vegetarianism thing which still scares the shit out of them today; apparently Satan loves him some meat with his holy water.

So there you have it, The Cathars, To Be or Not To Be.