Everyday is an esoteric day if you know where to look.  Take for instance today, March 20th, just another day, you wake up, do your morning routing, maybe pray to your monolithic god, maybe not.  Maybe you started your day chanting a Buddhist prayer as I have.  Whatever, if you look deeper into this day, you'll see that this is not just another day.

First of all, if you see a sparrow in your window today, you are in for a very, very lucky day for in ancient times on March 20, they celebrated the Norse goddess Iduna -- not to be confused with the minor character in the Disney's money-making movie called Frozen -- bastards!  The Iduna of which I speak was a bearer of light in the form of a sparrow who brings light and joy to humans announcing the arrival of Spring.

Woh, now if that doesn't get you excited about this day I don't know what will. Okay, how about this, in 71 BCE, on this day a total eclipse of the sun plunged Greece into darkness which prompted the Greek writer Plutarch to write that the phenomenon "showed many stars in all parts of the heavens and produced a chill in the temperature like that of twilight."  Unfortunately for the rest of the town they ran for their life's thinking the gods were pissed.

On March 20 in 1661 in Canterbury England, this news report comes to us from the Mirabilis Annus Secundus, a religious record which tells us that "A very large 'star' with an 'opening' underneath, from which issued streams of fire was seen for thirty minutes by all the town's people." Now if this wasn't a UFO I don't know what is.  Of course, these pre-Ancient Alien peoples used such anomalies as a warning "to repent and prepare to meet the lord who has giving a sign of his coming," instead of the obvious, "Run for your life, it's a fucking UFO!"

And, as with all esoteric days here on EsotericDaily.com, there are the modern coinkydinks which causes one to wonder life in general, for on this day in 1854 the Republican Party was founded as the antislavery party in order to fight the spread of slavery into the western territories of the United States.  Yeah, how about that for a news flash.

On this day in 1900 Nikola Tesla received his patent for the wireless transmission of free electricity.  Which as we all know was hidden by the greedy capitalist who can't allow anything to be free, well, except for their tax cuts for the rich and overcrowded prisons for you and me. I'm just saying!

In 1933, the Jews of Vilna, Poland, initiate an anti-Nazi boycott which was loved by all the Polish people until they signed a peace treaty with Adolf Hitler, who used the treaty to invade them a year later under the pretense of a "liberation."  Yes, a "liberation" like the one we see today in Ukraine from the Shirtless Warrior who has invaded them and forced millions to flee to Poland for safety.  How long will it be before history repeats and Vladamir Putin, the Shirtless Warrior, signs a treaty with Poland as a way to keep his claim on the Ukrainian people?  Only time will tell, but as history as proven over and over, we are idiots and the bad guys can never be trusted to anything different than what they are already doing?  Dah!

That's it on this March 20th.  Let's pray for peace, for on this day in 1969, the most famous peace lovers to date, John and Yoko, were married on this day in Gibraltar near Spain, as Lennon would later write in song: 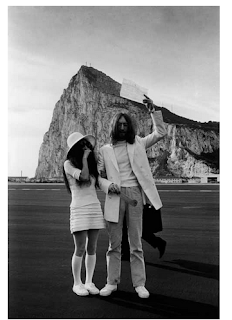 Finally made the plane into Paris
Honey mooning down by the Seine
Peter Brown called to say
"You can make it OK
You can get married in Gibraltar, near Spain"
Christ, you know it ain't easy
You know how hard it can be
The way things are goin'
They're going to crucify me