Year of the Tiger = Not Good for Taiwan or Ukraine. 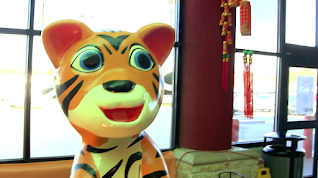 So it is the Year of the Tiger.  Here are the esoteric highlights for you boys and girls.

The Chinese Zodiac dates back to the Qin Dynasty over 2000 years ago and is rooted in the pagan practice of zoolatry (or animal worship). As the legend goes, the Jade Emperor challenged all the animals in the Kingdom to a “Great Race.” Whoever arrived at his palace first would win his favor. The Tiger was sure that he had the race in the bag, but ended up placing third after the cunning Rat and workhorse Ox snuck in ahead of him. Thus, Tigers are extremely competitive people, known for their courage and ambition.

The Year of the Rat (2020) was about survival (Removing Donald Trump from office), and the Year of the Ox (2021) was about anchoring ourselves in a new reality (Covid is here to stay). The Year of the Tiger will be about making big changes. This will be a year of risk-taking and adventure. I hate to tell you, but this probably means that there will be a Russian conflict in Ukraine, or China will impose its will on Taiwan, or worse, both!  You see, the Tiger is associated with Yang (masculine, active) energy, and as history has proven over and over: Masculinity = War.  That's the bad side, there is the positive side to the Tiger which I am chanting for daily: Tigers are extremely generous with a drive to help others. Tigers want to win but they’re also always seeking justice.  So, let's pray/chant for the positive tiger to take hold of world events, especially when it comes to China, Russia, and the U.S.

And for the really, deep esoteric in all of us, one should know that in addition to animals, the Chinese Zodiac also cycles through five elemental types. So, this is not only the Year of the Tiger, it’s the year of the Water Tiger. Water is the deep, ocean and running waters of a stream.  Which means, a lot of shit will be done in secret so we will really need to keep a watchful eye on the powers that be.  The good news is that Water Tigers are family-oriented and have wonderful interpersonal relationships. Though they’re extremely driven and can be brash, their goal is always to do what’s best for everyone, not just for themselves.

On an individual note, the colors of green and blue will bring good luck and fortune, and the lucky numbers are 1, 3, and 7 -- be sure to play them a lot at the races and lottery picks - ha.   This is also a  great year for switching careers, building teams or getting back into creative projects.  Life is short so why not be happy?