It is Twosday!  Wow, what a great day to be alive.  Not only is it the 22nd day of the 2nd month of the 22nd year, the date is also a palindrome, which means the same forwards and backwards.  This alone would make it an esoteric wonder, but wait, there is more.  It is the thin veil of High Priestess card in the Tarot; the “Change” hexagram in the I Ching; and most ominous, the day Pluto begins its Transit with promises of upheaval and change.  So hold on to your seats boys and girls, for today is the beginning of the promise of Aquarius which will be played out in Russia, Ukraine, China, Taiwan, and the USA.

The number “2” is the number of relationships. Personally this means get your ass out of bed because this is a good day to look at your relationships and let them flourish.  Let them go will they will for the outcomes will be doubled.  Call that family member you haven’t in a while and just say, “Happy Twosday,” you will be amazed.  Anything socially this day will be ordained by the High Priestess.  And why?  Well, as I told you in my post on numerology, “22” is a master number and can not be reduced.  It is the root of all numbers, the basic of all change.  In other words, “22” will rock our world today. 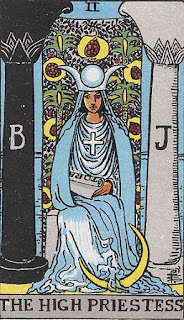 The number 2 Tarot care is the High Priestess.  She shows up in your reading when the veil of the underworld is thin. She stands between the pillars of good and evil where she is the third pillar, the path forward.  She also wears the crown of Isis because she is a believer in magic.  According to Labyrinthos.com, “The card itself shows a night-time scene, meaning that the world in which she protects and guards is one that may at first seem frightening, but has the potential to lead us into the growth we seek.”

The major event that makes this day such an object of change in the world, i.e., the escalation of the Russian/Ukraine conflict and China/Taiwan struggle, is that 2-22-22 is the day that Pluto returns in the US astrological chart after a 248 year absence. The last time Pluto was in the USA natal chart was in 1776, the signing of the Declaration of Independence.  Most esoteric thinkers agree this means the USA needs to get off its ass and act,  for democracy is on the verge of a breakdown and will fall to the evil autocratic forces rising in the world from Russia, China, and most disturbing of all,  the Trumpers wanting to do away with fair elections in the USA, if the USA doesn’t rise to the occasion, despotism will swallow us all.

Today, everything changes.  We either go forward or backwards.

According to the I Ching the number “2” is Receptive, and the number “22” is Grace.  My spirit guide tells me that this is the position the US is in on this Eve of war.  There’s nothing we can do.  The Year of the Tiger and its “masculine” energy can not be denied.  Hold on tight for February 22, 2022 is the first day of a new world.

In the end, when this is over, peace will come to those of us who want it.

Let’s chant for peace, protect the weak, and feed the poor. We are all in this together.