The Origins of Christmas: Satan and Coca-cola.

So it is Christmas.  Now, I love the "Peace on Earth and Good Will to...  All" as much as the next guy, but I also know this day has nothing to do with Jesus.  Now, if that's how you want to celebrate Christmas, so be it, I prefer to celebrate the inclusive Christmas without Jesus for its humanistic qualities.  Everyone knows Jesus wasn't born on December 25th.  Historian may argue about why this lie came to be, but nonetheless, all agree it is a lie.  December 25th was adopted by the Christian Church sometime in the 4th century.  Before that, December 25th was part of the Roman Saturnalia celebration that involved feasting, merry-making, and gift-giving.  But like everything else in history, i.e., Football, Beer, and Elvis, Christians change things to fit their beliefs instead of letting things be as they are.  Blasphemy?  Maybe.  Truth is, Christmas is nothing but Blasphemy.

The origins of Christmas began with Odin, who was the god of intoxicating drink and ecstasy, as well as the god of winter death. Because the Feast of Saturnalia dealt with all those things, he naturally became the most popular god of Saturnalia. 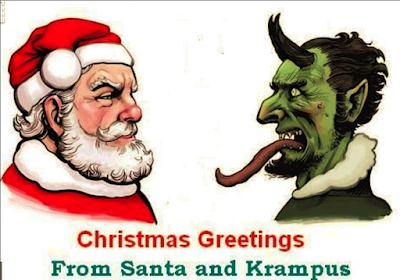 Odin was a tall, old man that had a long white beard and carried a spear.  Odin traveled around the world on a WHITE HORSE that had eight legs. This is where the eight reindeer came from. With Santa, originally there were eight reindeer. Rudolph was added later in modern times. 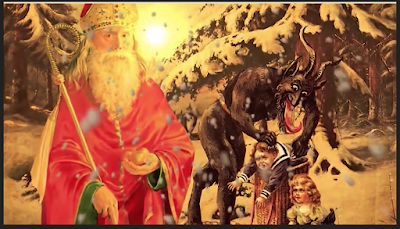 In virtually every version of Claus, he carried along with him a dark helper.  Eventually, these became the elves.  Originally, however, they were a demon looking helper that stood next to Claus with a horrid red tongue hanging from its mouths and it was called Krampus.  If the children weren’t good, Krampus  would beat the children.  So, the good guy or Savior, Odin who eventually became St. Nicholas, would come and give you gifts if you were good. If you were bad, Krampus disciplined you. 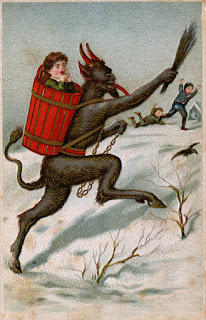 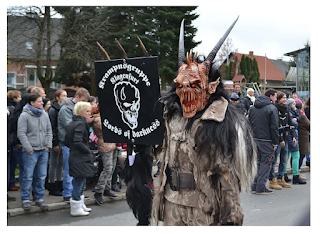 The picture upbove shows the naughty children being carried away by a Krampus, who is a combination of a human and goat. We see this all throughout history, a human mixed with a goat. The picture on the left is a modern day picture of a festival in Germany where they continue to do this celebration and bring out Krampus or Santa’s helpers to this day.
St. Nicholas and his demons are still celebrated in Austria, Hungary, Germany, Italy, and more. Every time you would see St. Nicholas he would be accompanied by his bells. They use to have bells that would hang from their necks. You would hear the bells as they announced to the next town that they were coming.  This is where we get the references to the bells of Christmas.
How did the progression of Odin to Santa Claus happen? Well, by the 1500’s in Holland, St. Nicholas became Sinterklaas; a kind and wise old man with a white beard, white dress, red cloak, a crosier and riding the skies and roofs of the houses on his white horse, accompanied by his Black Jacks, leaving gifts for people under his sacred tree, the fir tree. He would visit you on his birthday (December 25th), and give you gifts if you had been good or if you had been bad, his Black Jacks would beat you.
By the 1700’s a Dutchman immigrated to North America and brought his SinterClaus with him. The English dialect was then changed to “Santa Claus.” 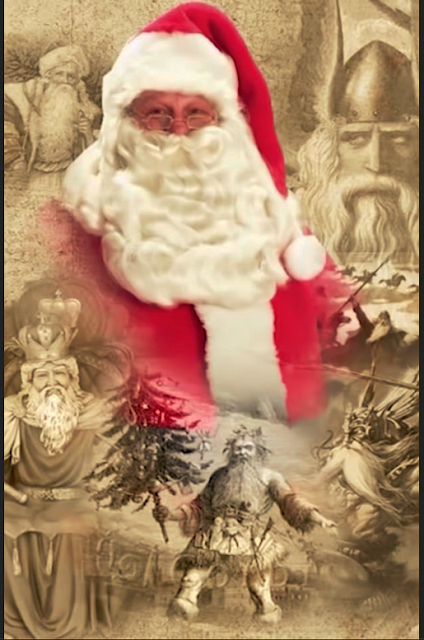 In 1930 a designer for Coca-Cola Company was trying to get people to buy their drink in the winter time. They took their company colors of red and white, borrowed the Sinterklaas story, changed a few things and out came the modern Santa Claus complete with reindeer and elves. The 1900 designer borrowed a picture from the 1800’s, modernized, added the colors, and out came the Coca-Cola Santa Claus today complete with the long white beard, chubby cheeks, and red and white suit.
IN THE 1970’S THE SECOND VATICAN COUNCIL FORMALLY STATED THAT NO ROMAN CATHOLIC BISHOP BY THE NAME OF NICHOLAS EVER EXISTED!
They down graded his saint hood because there was evidence that was presented to the Vatican that he never even existed. Vatican further confessed that the legends contributed to this “saint” had no Christian origin, and probably came from pagan traditions!
The evidence showed this saint was made up and connected to the sun god worship of Odin but had been Christianized and a saint was made out of him. Eventually, the colors got changed, the elves came into the picture and they went from being evil to cute little guys that make toys which is another American modernization. 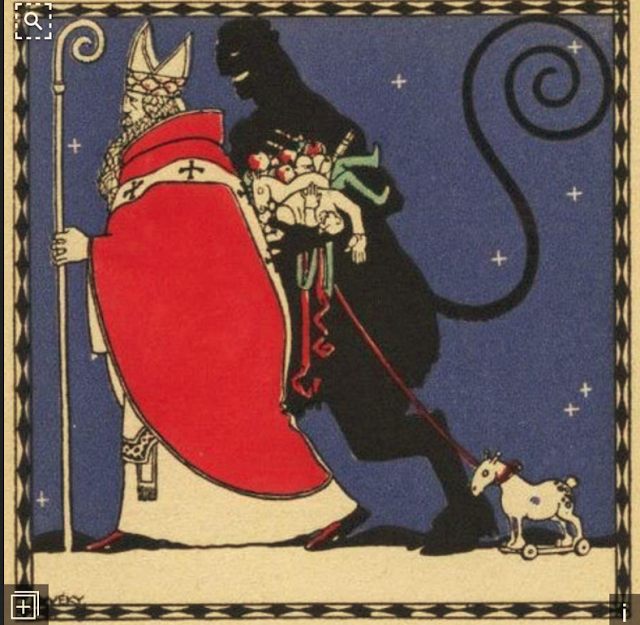 Now you know the real origins of Christmas:
Happy Xmas.