So it is December 13, the real day that begins the Christmas season to me.  In Sweden they celebrate Saint Lucia's Day (St. Lucy's Day). 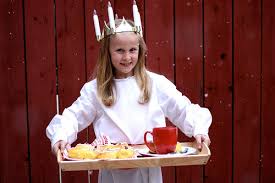 St. Lucy's Day is a festival observed throughout Sweden in which the first-born daughter of each family wears a flowing white gown and a crown of candles around her head, obviously in reference to the ancient Pagan symbols of fire and life-giving light.  The daughter traditionally serves her mother and father breakfast in bed.

So the story goes something like this: around the year 283 when Christianity was starting to catch on and replace the earth religions,  a Christian virgin named Lucy was offered to a Pagan for marriage by her dying mother, but, before the God-forsaken Pagan could get his dirty hands on Lucy, Saint Agatha appeared to her in a dream and told her that her mom would be heeled and that she didn't have to marry the mean old Pagan, and could remain a devout virgin the rest of her life!  When her Pagan suitor heard of this, he demanded she denounce her beliefs or be sold into prostitution.  She refused and the shit hit the fan: a soldier stabbed her in the neck with his sword to stop her from talking bad about the Pagan Gods, but Lucy survived and kept on stating her love for the Pope.  This infuriated the soldiers and so another stabbed her in the eyes which bled like crazy before miraculously healing.  In other words, the bitch just wouldn't die, that is, until a priest came along and read her the Last Rites.   Then all was well, so the story goes.
Another story says St. Lucy hid in the catacombs of the city attending to injured Christians with candles on her head.
The truth of the matter is that around the year 283, when the Christian Calendar was being used by some while most of the world was still on a lunar calendar, December 13 was the on the winter solstice and so it was the shortest day of the year and everyone outside had candles on their heads.  And Lucy, well, an inscription in Syracuse dedicated to Euskia mentions St Lucy's Day as a local feast that dates back to the 4th century A.D., which states that "Euskia, irreproachable, lived a good and pure life for about 25 years, and died on my Saint Lucy's feast day, she for whom I cannot find appropriate words of praise: she was a Christian, faithful, perfection itself, full of thankfulness and gratitude"
So, the celebration was going on before Lucy came along, but, in a time when living to thirty was considered a long time, she lived a good life for twenty-five years, apparently, a rare thing back then.  In other words she was a good woman and should be remembered as such.  So, put those candles on your head in honor of her and pray to whom ever you want, winter is here!
Live, love, and prosper.  And to all, a good night.
~~ Eso Terry