So I need to apologize for my last post.  I should never have made the killer's motives a matter in the senseless killing in Colorado this week.  I've been searching the web to see what his motives were and have been reading the people on the Right say things like, "There they go again blaming it on the guns..." and those of us on the Left saying, well, read my last post.  The fact is people are dying and until we become kinder to each other, it will continue.  Unfortunately, the smoke hasn't cleared on the Colorado shootings earlier this week, and last night in Virginia Beach 9 people were shot and 2 more dead.  It's the Wild Wild West again folks, yee haw; in last night's killings, it was originally 1 dead and 8 shot, but then another armed person showed up and started shooting and so the police shot him.  And the madness continues. The NRA has more proof we need more guns to protect ourselves, and them Leftist -- like me-- have more proof we need some kind of guy control.  Damn, if only Steve Jobs were still alive and could make a Smart Gun, you know, a gun that will only kill Long-Haired-Freaky-Looking Dudes.

You talking to me?

That's all I got today, sorry again for my last post, motives don't matter actions do, we're all in this together, let's do something; and so I want to begin the conversation that we go to the Dodge City Law, that is, leave your guns out of the cities and suburbs.  You can have your Ak47s and Uzis outside of the city limits to protect your lifestyle from those last remaining coyotes you're always bitching about. 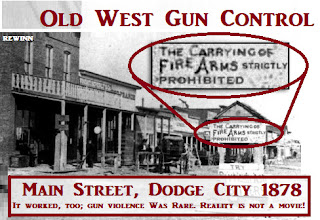