In case you missed it, one of the Young Republicans at the recent Trump rally in Tulsa said possiblely the stupidest thing ever, and the problem is that he probably believes it because Donald Trump tells him it's true.  The Young Republican said: "Aunt Jemima was canceled... She was the picture of the American dream. She was a freed slave who went on to be the face of the pancake syrup...She fought for equality and now the leftist mob is trying to erase her legacy. And might I mention how privileged we are as a nation if our biggest concern is a bottle of pancake syrup."

It's bullshit.  Here's the truth:

The original image of Aunt Jemima, as depicted by Nancy Green was that of a "mammy" caricature. The offensive image depicted female slaves as happy to care for the white family of the slave owners and were happy to be enslaved.

Additionally, the brand got its name from the song "Old Aunt Jemima," which was performed at minstrel shows, often by a white man wearing blackface.

Despite her lifetime contract with the brand, Nancy Green worked as a housekeeper until she died.

So, the idiot Young Republican can go on believing what he wants, but he's an idiot in doing so. 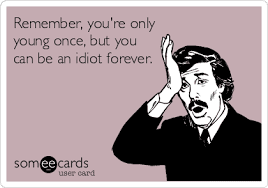 On a brighter note, Mike Pence slips on a Covid 19 mask tossed on the steps of Air Force One by Donald Trump.