I'm tired of writing and thinking about bad people.  Without mentioning names, there are a lot of asses in the political world.  Okay, "asses" is a bit much, I mean, dick heads.  I think that's more polite.  The head of a dick has no mind of its own and only does what the body commands of it.  Sound familiar?  It should, that's the Republicans who are doing Trumps work for him.  We all know who they are, what they say, what they do and don't believe.  What we don't know is how do they continue to get away with it?  Really.  Take... oh, I don't know, let's say Mitch McConnell: never has there been a more hypocritical person on the planet.  He refused to confirm president Obama's Supreme Court appointee with a year left to go before the election, but has already said that if an opening comes in the last year of Trump's presidency he would rush it.

They don't even pretend to be fair.  And their supporters love it.


Anyway, this is a circle jerk.  Same shit I've said over and over and yet, Mitch McConnell still plays his banjo.

I figured today I would give you some Buddhist scripture to sum up the shit:

And for more Mitch McConnell humor, I leave you this: 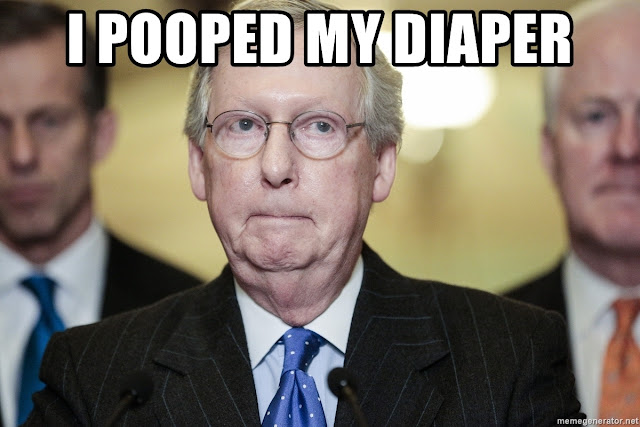