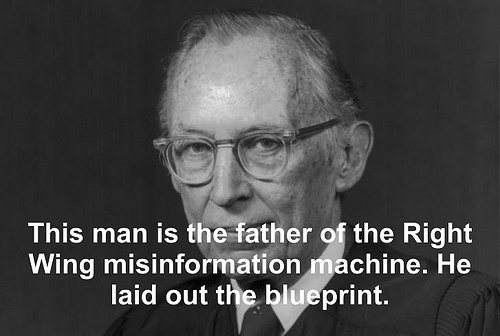 The US Politics have been ultra conservative since Ronald Regan and it’s wasn’t by the will of the people, but by the power of the rich.  This is why we presently have President Donald Trump, the most out-of-step with reality president ever.  President Trump is using the conservative-lie machine that is controlling everything from your local news paper to your Saturday morning cartoons to keep his control of you and me.  President Trump has said, “I could shoot someone on 5th Avenue and they would still vote for me (paraphrased).”  He is right too!  But why?  But how?  I’ll tell you:  the Conservative Lie that took us away from out natural progression and gave us today’s greedy 1% monster.   Let me remind you, President Trump, the guy who admitted on tape that he “grabs” woman in the private area because “as a Star you can do it.”  President Trump, who called an American hero (John McCain) a loser for getting captured during the Vietnam War.  President Trump, the man who has admitted working with a foreign government to investigate a political opponent....  is still running this country and the Republicans are supporting him like no tomorrow.  Why?  How?

Well, I’ll tell you: It happened with the Powell memo written on August 23, 1971 by a conservative lawyer who sat on 11 corporation boards and saw how the natural progression of things in the USA wasn’t in his favor and so wrote a  “cult” document to stop the progress and make him and his corporate buddies more powerful than ever; more powerful than the framers of our constitution ever imagined.  And it is this power that has us killing and blaming each other over the dwindling resources they’ve left us by taking their tax revenues away from us.  Do you realize that you are taxed to pay for your city’s Football Stadium because it creates jobs.  Are you f*&king kidding?  Education creates job, not hot-dog vendor-ship.  Why?  How, did we start thinking this way?

Before I go further, let me remind you that I’m a Ben and Jerry’s Capitalist.  I believe in having private companies where owners make a shit load of money if that’s what they want; I also believe you should have a gun to protect your home, and be able to call Christmas any goddamned thing you want; what I don’t believe in is blaming the poor and working class for the massive debt this country is adding on a daily bases from wealthy tax cuts and unfunded wars; i.e., the greedy profits of the 1% who know the bottom is falling out and don’t give a shit because they have an escape plan for their family — Swiss bank accounts and Community Share islands in the South Pacific are their latest schemes, and if you haven’t heard about them, you better start paying attention to what is at stake here because you’re one of us and their plan doesn’t include you no matter how well you’ve tailored their suits, coordinated their stock portfolio, or drop-freighted their Bentley.

The Powell Memo was the precipitation event for the swift rise and astounding success of big business and its takeover of the United States.  The memo presented a bold strategy for how the corporate life form could take over the key portions of the system, without the other side knowing what was happening.  Here is the first page of the memo (excerpted from thwink). 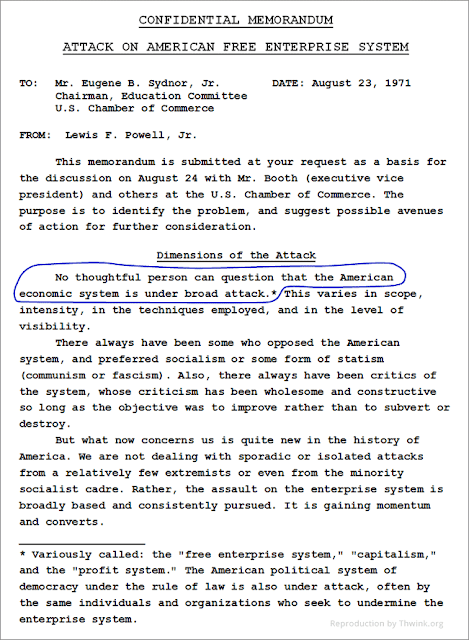 The memo opened with the fallacious but highly effective appeal shown above.  Note the key assertion that framed the entire memo:

“No thoughtful person can question that the American economic system is under attack.”

This is The Big Lie Gambit.  If the reader swallows it they are hooked. 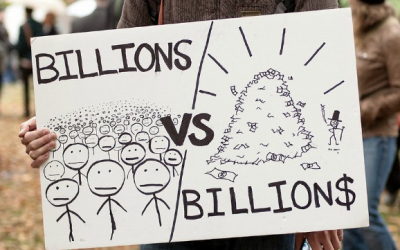 “The American economic system” was not under attack.  In truth it was big business that was attacking The People and the common good.  Once the reader swallows this first fallacy, the rest of the memo works.  It’s infective.  So much so that the Powell Memo master plan worked.  In the 40 plus years since it was written corporations have taken over the American system.

Furthermore, thoughtful people can question bold assertions like this.  As soon as you see phrases like “no thoughtful person can question” you should reject what follows, because this is a classic form of deception.  It’s a standard setup for an argument that has little strong logical evidence but lots of weak emotional evidence and mountains of rationalizations and lies.


(To learn more about the truth of the Powell Memo click here.)

The Powell memo goes on to list the takeover of universities, school boards, news outlets, etc.  It changed the conversation from “taking care of our society” to “protecting the private.”   It’s why you don’t really understand anything anymore.  Deep down inside you know the truth, but what you are reading is different, so they must be right?  They are not.  They have a control on you and the end game is ugly.  They take the resources away while we all die.  That’s the option left.  They have creative so much debt that it will never be paid.  Chaos is coming.  We all know it.  We think we’ll be save hiring in our basements, living off of our 401K, our gated community.   You won’t be.  The plan is to thin out the populace their way.  Mass extinction.  We gave them a better way in the 1970’s.  We gave them a clear path for sustainability.  At the time it was possible too.  Control population, protect the environment, tax the rich to pay down the debt.  It scared them and so they wrote the Powell Memo. 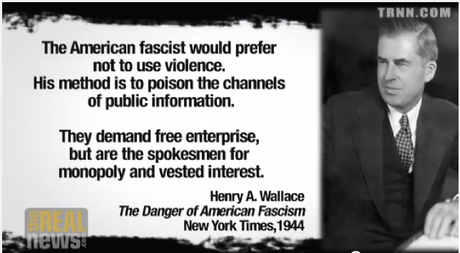