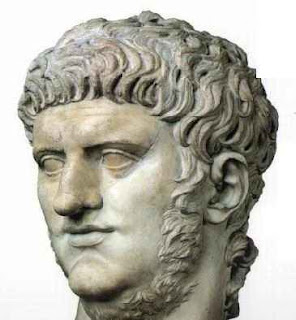 According to the Roman senator and historian Tacitus, writing some fifty years after the event, a fire began on the hot summer's night of July 18, 64 AD in the southeastern end of Rome's largest hippodrome, the Circus Maximus.  Because the majority of Romans lived in wooden houses, the fire spread rapidly through the city, where it continued to burn for five days.  By the time it had been extinguished, it had razed four of Rome's fourteen districts and severely damaged seven others.  Many important buildings were destroyed, including Nero's palace, the Temple of Jupiter Stator, and the hearth where the sacred fire was kept burning in the Temple of Vesta.  The people of Rome were devastated and looked to their emperor for help.

When the fire started, Nero was taking his ease at Antium, a resort town on the coast some 31 miles south of the capital.  Concerned with his city, Nero hurried back to the capital in order to coordinate efforts to extinguish the fire and provide disaster relief for the population, with funds paid out of his own treasury.  When the fire was doused, Nero opened his palaces to survivors whose houses had been destroyed and ensured that food and other essentials were distributed. 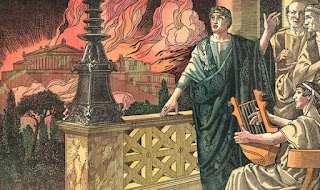 Once the fear and shock had worn off, people started looking around for someone to blame.  It was widely known that Nero had grand plans for the reconstruction of Rome, so rumors began to circulate around the city that it was the emperor himself who had ordered Rome to be burned to the ground.  Alarmed by the growing hostility of the people and desperate to retain their loyalty, he looked for a scapegoat, at which point his gaze fell upon a new sect called the Christians.

Tacitus goes on to say that Nero created a diversion and subjected to the most extraordinary tortures those hated for their abominations by the common people called Christians.  So an arrest was made of all who confessed to be Christian and all were convicted, mocked, and throne to dogs, or nailed to crosses, or doomed to the flames. 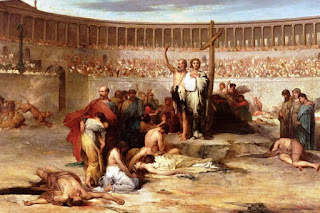 That's the story being told 64 years after the Christ thing, which, probable helped convert more Pagan's than the actual Christ Story.  But was it true?  In his book "The Greatest Lies in History," Alexander Canduci points out a few facts to the contrary.

Rome was not the marble, wide streets of the movies.  It was actually a jumble of wooden terraced homes, and fires were very common.  So when Tacitus claims that the only way a fire could have spread was from arson, doubtful. 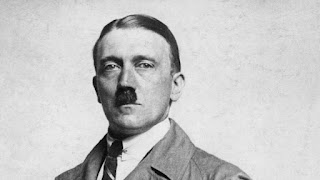 On this day in 1925, seven months after being released from Landsberg jail, Nazi leader Adolf Hitler publishes the first volume of his personal manifesto, Mein Kampf.  Dictated by Hitler during his nine-month stay in prison -- and edited and contributed to by all-the-great-hate-minds-of-the-day -- Mein Kampf, or My Struggle, was a bitter narrative filled with anti-Semitic outpourings, disdain for morality, worship of power, and the blueprints for his plan of Nazi world domination.  The autobiographical work soon became the bible of Germany's Nazi Party.  In the early 1920's, the ranks of Hitler's Nazi Party swelled with resentful Germans who sympathized with the party's bitter hatred. 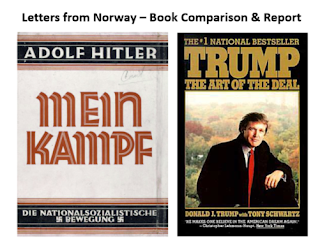 Trump and Hitler proceed from the same apocalyptic starting point.  In Trump’s narrative, America is on the brink of ruin.  At least a portion of his listeners, as did Hitler’s, passionately believes the downfall scenario. Each man is (or was) skilled at setting up bogeymen:  For Hitler, it was Jews, Marxists, the hated French and the “lying press.”  For Trump, it is Muslims, Mexican illegals, the Islamic State terrorist group and the Chinese who are supposedly cleaning our clocks, and the “dishonest” news media.  Yet, like Hitler, Trump understands the importance of the news media to his political enterprise.  In 1987, Trump wrote in the book he now holds up as a kind of Trump bible, The Art of The Deal: “If you are a little different, or a little outrageous, or if you do things that are bold or controversial, the press is going to write about you.  Hitler couldn’t have agreed more.  After a particularly violent beer hall rally in Munich, he said:  “It makes no difference whatever whether they laugh at us or revile us.... The main thing is that they mention us.”

“Progress and civilization could be achieved only through the genius and energy of a great personality.”
Adolf Hitler

“I alone can save America, save the world, save you!”