Yes, sorry, but I do have to weigh in on this Donald Trump Bad-Ass border problem where he is arresting everyone because they are not White.  Period.  If a group of fair-haired blue-eyes were coming to the border, no doubt they wouldn't be treated like Salvages of old and their kids taken away.

The real issue here is that Trump has decided to arrest them all, no matter what their reason for trying to get into the USA is.   This has created the mess, and if you believe anyone else had anything to do with this other than Trump, you are an idiot and really, really need to read this.

It wasn't that long ago that the right-wing Church people said "America will be judged by it's Sins."  I think they were using the blow-job President Bill Clinton received from an intern while he was president.   They blamed everything wrong with the world on that blow job.   It was the reason a crazy lunatic drove his car up on the curd in Reno Nevada and murdered about twenty people -- and at least one was a minor!!!!  Oh my God!

Where are these people now?   Oh, you know where: they are on their knees prying "Thank You Jesus for Our White Supremacist Savior," no matter how many salvages he has to murder.

Look at these imagines America: 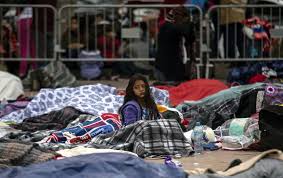 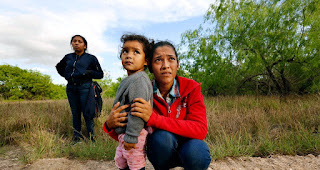 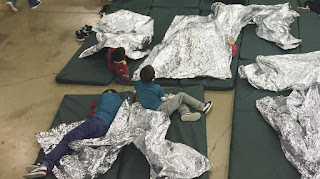 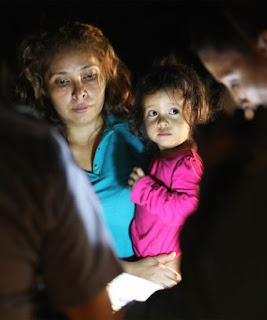 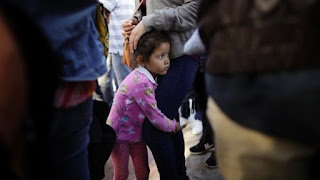 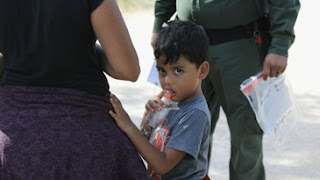 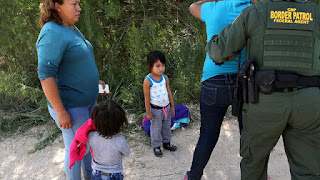 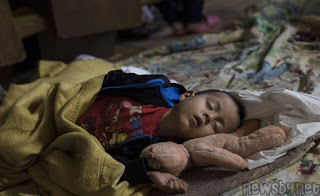 If you don't this these children being taken from their mothers is not a greater sin than Bill Clinton receiving a peal-neckless from an overweight intern while president of the USA, you have another thing coming.

Here's two real things for you to consider, tonight while you are in your comfortable bed:

One, these people coming to the USA are not criminals.  They have no-other choice.  Their world has been raped by American greed.  Their country, just like the rest of the world, is part of the greater Capitalistic Failure being experienced by the whole world.  We are the only raft boat in the water and they are smiling to it.   Yes, we can't let them all in because it will sink us.   But, we are the ones who raped their resources, busted their good-governments because we called them "communism" and so placed right wing dictators in their who sold their resources to us for personal gain.   When the Venezuela government was feeding all its people, Ronald Reagan sent in CIA backed radicals to overturn their government.   They weren't communist.  They were socialist and that scared the shit out of the greedy capitalist.   It still does.   The bottom line is you can't have a few wealthy people who own everything without a majority poverty.   And until we wake-up and share the wealth, the would will continue to decay.   We are the iceberg that hit the Titanic.   The world is the water we are all left with.  The USA is the biggest raft left and everyone is swimming for it.   Truth is, we can let them drown out there, or all drown together.   It doesn't matter: The Trumps, Bush's, DuPont, Koch Brother: the Wealthy are safe on their personal island.  Their not even getting wet because they got you blinded to the fact that their personal islands even exist.   Their personal islands which if they would share, we would have no needs for the lift boats.

We're sinking people and it's because of the greedy "bad" capitalist.

At best, you have another year or two to enjoy your lifeboat, but if you don't start charting a course for those private islands soon, their will be no hope.  And do you think the top 1% care?  No, went the bottom falls out everywhere as it has in South America, Greece, Spain, and soon to be Italy, your Fox News lies won't even help you.  Nor will your fake Jesus.

John Barleycorn
Traffic
There were three men came out of the west, their fortunes for to try
And these three men made a solemn vow
John Barleycorn must die
They've plowed, they've sown, they've harrowed him in
Threw clods upon his head
And these three men made a solemn vow
John Barleycorn was dead
They've let him lie for a very long time, 'til the rains from heaven did fall
And little Sir John sprung up his head and so amazed them all
They've let him stand 'til midsummer's day 'til he looked both pale and wan
And little Sir John's grown a long long beard and so become a man
They've hired men with their scythes so sharp to cut him off at the knee
They've rolled him and tied him by the way, serving him most barbarously
They've hired…
They've wheeled him around and around a field 'til they came onto a pond
And there they made a solemn oath on poor John Barleycorn
They've hired men with their crabtree sticks to cut him skin from bone
And the miller he has served him worse than that
For he's ground him between two stones
And little Sir John and the nut brown bowl and his brandy in the glass
And little Sir John and the nut brown bowl proved the strongest man at last
The huntsman he can't hunt the fox nor so loudly to blow his horn
And the tinker he can't mend kettle or pots without a little barleycorn
Songwriters: Steve Winwood
John Barleycorn lyrics © Warner/Chappell Music, Inc, Kobalt Music Publishing Ltd.