We all know the Bible (and Disney) story of Samson, the Jewish Hercules who goes on an unstoppable rampage, slaughtering the Philistines, but then, done in by a woman, Delilah, who cuts off his hair, the source of his strength.

Ignorance is fine, it keeps some smiling.   And those who smile from it are okay by me.  However, those who condemn others by it, very much, scare me.  Take for example the biblical story of Samson.  One can say that there are three attitudes towards this Old Testament story.

The first sees Samson as an actual event in history and to think otherwise is blasphemous.

The second type see the story as a lie, an old story told to keep a tribe of people scared so they would be obedient to their leaders. These people are sometimes atheist, but more times than not, power-hungry/greedy bastards who want to rule the world by pretending to believe to get your vote.

The third type are you and me, Truth Seekers and Lovers of Light.  This essay is for you.

We look to the facts that the primitive people who told the old bible stories, were familiar with their own feelings, but knew little else.  So they explained everything in nature by projecting themselves mentally upon it, by personification.  The stones, the trees, the hills, the earth, the clouds, etc., were all real to them, not figurative.  If a single person related a story of an isolated event to one of the other tribe members, it would soon be lost, but if this person related it to the natural world, it would live on.

Chief among these stories were the ones connected with the sun, and such an all powerful heavenly body as this could but be represented as a God.

When his father has gone to rest, Sun God is born and goes forth to fight with Storm and Darkness and make Earth fruitful.  He has many amorous frolics with the Dawn Maidens and many midnight escapades with the Evening Twilight Goddesses.  He is mighty in his own strength and slays his enemies.  After victory he retreats and sinks to rest or dies.  Something like this was used to explain the solar year. 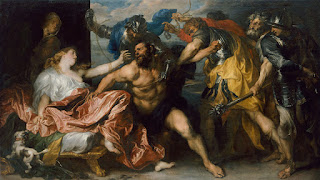 The name Samson, according to the best etymologists, is most clearly derived from the Hebrew word shemesh, meaning sun.  So, from shemesh, sun, we have Shims-on, the Sun God.

Samson is the son of Manoah, a word meaning “rest,” a representation, like the more famous Noah, of the winter sun.  After the labors of summer, primitive man and woman conceived the sun to be tired and to have gone southward to sleep — a conception much like the resting of the Creator on the seventh day.  The angel who predicts his birth disappears in the fire of the altar, which introduces the series of fiery incidents carrying a strong taint of solar origin.  Like all Sun Gods, he must have his frequent love affairs, and the first one is with a daughter of the enemy, whom he weds.  This is the marriage of the sun with the moon, daughter of night, and must end in a separation, for the two luminaries do not keep company long.  On his first journey down to woo his captivator, he kills a lion, an emblem occasionally sterility; it is his first triumph — the youthful sun destroying the winter’s dearth and warming it into fruitfulness.  On his way to the marriage he sees bees in the carcass, which suggest a wedding riddle and he proposes it under a wager: “Out of the Eater came forth Meat and out to the Strong came froth Sweetness.”  This riddle was probably a part of the Hebrew folk-lore and the author of Judges weaves the popular solution of his times into the story, but it is very unsatisfactory, for we know that bees would not make honey in decaying flesh; it would spoil and the whole swarm be starved out.  A better explanation was close at hand but, of course, could not be seen in those days: “Out of the Eater (burner) came forth Meat (fertility) and out of the Strong (Sun) came forth Sweetness (fruitfulness).  His bride weeps before him seven days, longing with female curiosity for the cue to the mystery, and when she finds it, straightway goes and tells it to the thirty companions of Samson.  What could more plainly indicate the solar character of our hero than the recurrence of those mystic numbers, seven and thirty, the days of the week and of the month?  Here we deviate a little from the order of the narrative to call attention to the deception practiced upon Delilah.  When she teases for the secret of Samson’s strength, he fools her with the seven withes, the seven cords, and the seven locks of hair.  The amount of the bet was thirty sheets and thirty changes of garment.  While he is killing thirty Philistines to get booty sufficient to pay the stakes, his wife, supposed by her father to be deserted, is given to one whom Samson “had used as a friend.”  Here is the cruel separation which we predicted.  In the month called Jarad or Irad, the month of the “Descent of Fire,” corresponding to our August, Samson lets loose his three hundred foxes, tied tail to tail with burning embers between, and sets fire to the wheat of the Philistines.  This is so plainly an action of the sun, that it is hardly necessary to say that the fox was an animal symbolic of solar heat, because of his color and long-haired tail; and that at the festival of Ceres at Rome, a Pagan festival, a fox-hunt through the circus was held, in which burning torches were tied to the foxes tails, a reminder of the robigo or “red fox,” a sun-blight of their fields.  Then the Philistines burn his wife and father-in-law and in revenge Samson inflicts a great defeat upon them.  Now comes the cowardly flight and hiding in the rock Etam, from which retreat he allows his countrymen to take him bound into the hands of the enemy.  We are getting along toward autumn, in this legend of the year, and signs of weakness begin to appear — the Sun is retreating toward the South.  But when he comes among the Philistines his bands “become as flax that was burned with fire” and as with an ass’s jawbone a heap, two heaps — with an ass’s jawbone he slew a thousand men.”  Casting down his curious war-club, he names the place in its honor, and, becoming thirsty, water issues from a hollow place in the jawbone, and this pool is named En has-kore, (Spring of the Crier).  The writer tells us that both these names are attached to the locality in his day.  These are plain cases of those frequently recurring mythical explanations of the configurations of the landscape. 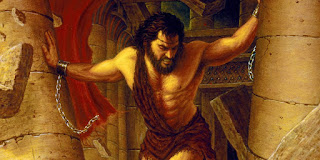 The ass, like the fox, was in many nations sacred to the Sun God on account of its color, and is often prophetic; witness the case of Balaam’s ass.  The jawbone being cast by Samson, and the coming forth of the water, suggest the Divining Rod and the Wishbone, symbolic remnants of the rock-cleaving, forked Lightning God, thrown down during the thunder storm; and the name, “Spring of the Crier,” fits well the thunder peal that follows.  Rustics still use the Witch Hazel crotch to search for springs, and no child can eat a Thanksgiving dinner without longing for the Wishbone.  Samson now pays a midnight visit to a woman of questionable repute at Gaza, and the Philistines think they have him entrapped.  But he takes “French leave,” and, as a practical joke, takes along the gates of the city, posts, bars, and all, depositing them on the top of the hill opposite Hebron.  This harlot, and Delilah, are sunset Goddesses, daughters of darkness, with whom every Sun God must have frequent escapades.  The humor of the exploit with the gates vanishes, when we see that they are an explanation of the great clouds of winter, appearing on the southwest at sunset and on the southeast at dawn; Samson, the Sun, takes them with him and leaves them there.  Now comes the last love experience, with Delilah.  True to her sex, she pines for secrets, and now it is the secret of secrets, the cause of his strength.  After fooling her three times with false answers, he at last  tells her the true source; it is his long hair.  While he sleeps she has it shaved off and he falls an easy captive to the enemy, who put out his eyes.  The blind old man is called in to amuse them at a feast given to their god Dagon.  But his hair has begun to grow again, and bending between the pillars of the temple with one last effort he pulls it down upon them and dies.

These last events are the ones of all to fasten the solar character of Samson.  His strength is in his long hair — the rays of the sun; while he sleeps, in the winter, or at night, or when covered by the storm cloud, the rays are cut off.  His enemies, the Gods of winter, darkness or storms, put out his eyes and laugh at his helplessness.  There is a touch of sublimity about the scene of his death.  He goes down between two pillars amidst the general destruction of his enemies; by one sun’s death a new one is born, which destroys completely the opposing forces of cold and darkness.  Hercules also had to do with two pillars; he sets them up at the mouth of the Mediterranean, those world-famed rocks of Gibraltar.

Many minor points of symbolism have been omitted in this brief survey of the narrative, and in those given, there is ample opportunity for shades of distinction to be pointed out by differently constituted minds; for in such interpretations there can be no iron-clad rules to follow.  But the atmosphere of mythology enveloping the story is so oppressive, that no one, who has the least susceptibility to its influence can resist it for a moment.  Only such as cannot distinguish between accurate history and mythology at all, or are completely stunted by theological preconceptions, will fail to respond to such overwhelming case as this. 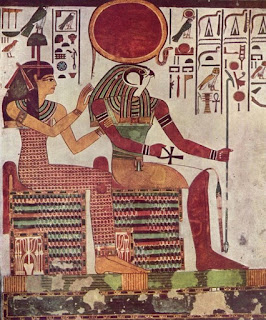