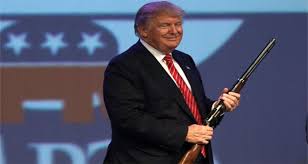 Think our government is out-of-control today, doing what it wants with no respect for the law?   Even the most Republican of Republican attorneys I know feel this... as they should:  trump speaks badly of our judges he doesn't agree with (even the Republican ones); he trashes a Republican hero in the name of John McCann who served in Vietnam for our country, but because he got "caught," draft dodger Donald Trump makes fun of him.  Not only this, he has admittedly called Republicans "idiots who would vote for anymore who said the right things," and they are surely proving him correct on this.   However, let me take you back in time, back to 1856 when the Gold Rush in California made San Francisco and its officials money-grabbing-law-breakers and the solution the people came up for this:  they formed a vigilante to combat the robbers and other crimes.  Some offenders were hanged, and others escorted out of town. 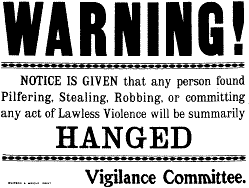 Hmmmm, maybe this is what we need.   Maybe liberals should start buying guns too!

What a wonderful world it would be. 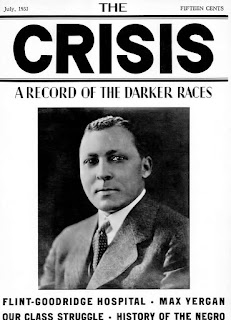 "Too often the story of the southern Negro deals exclusively with those who are time," wrote Roy Wilkins in Crisis magazine.  "But there are some...who dare to speak out and, if necessary, to act....Southern white people, almost unanimously, characterize such Negroes as 'crazy.'"

Such was the case on May 15, 1936, in Gordonsville, Virginia.  William Wales and his sister Cora, both in their sixties, held off a lynch mob of five thousand for six hours until a gasoline-soaked torch tossed into the house killed them and burned their home to the ground.  Gory details of the siege and subsequent killing of two "crazy" blacks filled local newspapers. Wilkins patched together a truer picture form Associated Press wires and the accounts of area residents.  But, what really transcends the brutality in Gordonsville is the courage under fire that the Wales and so many other African Americans have displayed at such terrible times.  From Wilkin's editorial: 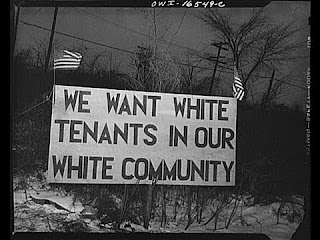 Impatiently the mob waited for hours for the embers of the house to cool.  Them, the killers rushed in and chopped up the two bodies for souvenirs to carry home.  The story behind the slaughter is that...efforts had been made over a period of thirteen years to oust (the Wales) from their property.  They refused to sell.  The city condemned a part of their land to expand the cemetery.  (After) their final refusal to vacate their home...local whites were forced to fall back upon the time-worn device of dragging some white woman into the quarrel and charging Wales with threatening her, "(a charge) she vigorously denied--after Wales was dead.  Anyway, the sheriff swore out a warrant charging Wales with lunacy.  When the sheriff appeared to serve the warrant he was shot and killed.
some white people...are shamed by Gordonsville.  They know there is more to the story than the killing of a sheriff and the destruction of a "crazy Negro."  Yes, the Crisis defends William and Cora Wales.  We think we understand them...We think we know the real criminals in these situations everywhere.  Crazy?  Wales was not crazy.  The two sane people in all that array were in the house.  It was five thousand outside who were mad.