We are all pagans in the end. 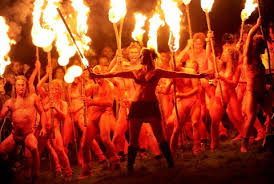 Walpurgis Night derives from an ancient Teutonic holiday when the arrival of spring was celebrated with nocturnal bonfires.  In Germany, birch boughs are placed on doors to protect homes from sorcery.  Fires and torches of rosemary and juniper are lit, and according to legend, witches may be seen riding broomsticks across the sky.

What's this got to do with you and me?

Our roots baby, that's all I'm trying to show you here is that our roots are a natural religion, one that doesn't need a Jesus or Mohammad to get us into ever-after.  A truth bigger than god Himself, a truth that doesn't discriminate on color of skin.  A truth that frees us of the church lie!   For, I totally believe with all my piss, shit, and honey, that before we can go forward as a people, we have to go back to our garlic-in -the-doorway past, before the scene of the crime, dancing in circles, holding hands, waving wands....

We are all pagans in the end.

From the Dreams of Eso Terry 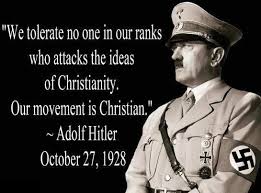 It is widely believed that Christianity spread because it was a great idea desperately needed in a wold devoid of hope and faith.  Indeed, the myth says that Christianity was such a great idea that it caught on like wildfire in a lost world barren of spiritual enlightenment and crying out "like a voice in the wilderness."  It is further maintained that Christianity spread because of the "martyrdom" of its adherents, which purportedly so impressed a number of the early Church fathers that they cast off their Pagan roots to join the "true faith."  In reality, Christianity was a new and surprising concept, and the impression of the ancient world given in this story is incorrect, as the ancient cultures possessed every bit of wisdom, righteousness and practically everything else found in Christianity.

Like so much else about Christianity, the claims of its rapid spread are largely mythical.  In reality, in some places it took many blood-soaked centuries before its opponents and their lineage had been sufficiently slaughtered so the Christianity could usurp the reigning ideology.  Pagan Europeans and others fought it tooth and nail, in an epic and heroic effort to maintain their own cultures and autonomy, in the face of an onslaught by those whom the Pagans views as "idiots" and "bigots."

If frantic activity is aimed at satisfying one's personal ambitions, and if in the process one exhausts oneself and ruins one's health, this is tantamount to destroying oneself for nothing.
Daily Advice from the Heart, Dalai Lama 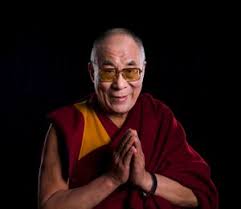